Having recently purchased a new 11-inch Apple iPad Pro I’ve now entered the world of USB-C cables and charging solutions. Up until this point, I’d only owned one other USB-C powered device, using a converter cable to keep it charged while on the go. But the world is embracing this new type of plug in a big way, so with my latest gadget spurring me own, I decided to take the plunge and invest in some new charging options for when I’m traveling. What I found were some fantastic new products that deliver faster, more powerful charging in an affordable and efficient manner.

For those not well versed on USB-C yet, get ready. While the port has been a staple in the Android smartphone market for some time now, Apple’s adoption of it is helping to spur it on amongst consumer devices. The tech giant has been using USB-C in its laptops for awhile now and there are some indications that it will come to the iPhone later this year too, replacing the proprietary Lightning port that has been used for many years.

The problem is, that while USB-C does offer some nice steps forward, it is also a bit of a muddled mess as well. While Lighting offered the same performance no matter which device or cable it was found in, USB-C isn’t quite so clear-cut. For example, some cables only deliver power and not data and knowing which ones do both isn’t clear by looking at them. On top of that, there is no clearly defined USB-C “standard”, which means there is the potential for one cable of charging device to work with some of your gadgets and not work with others.

Those issues are being sorted out quickly however and USB-C brings some nice advantages over its predecessors. Not the least of which is that the port is designed to be universally shaped, meaning there is no right or wrong way to plug a cable in. On top of that, a full-spec USB-C port can both deliver and accept power, which means I can actually use my shiny new iPad Pro to recharge my iPhone simply by plugging it into the iPad’s port. You’ll also find USB-C PD mentioned quite a bit when researching these cables and chargers. That means “Power Deliver,” which is exactly what you want when you want to keep your newest gadgets charged while on the go.

One of the companies that have been on the forefront of delivering USB-C charging options for travelers is RavPower, which has been making portable power solutions for some time. Now, they’re delivering some excellent new options that travelers are going to appreciate having in their bags because they deliver quite a fit of functionality in a small, lightweight, and efficient package. 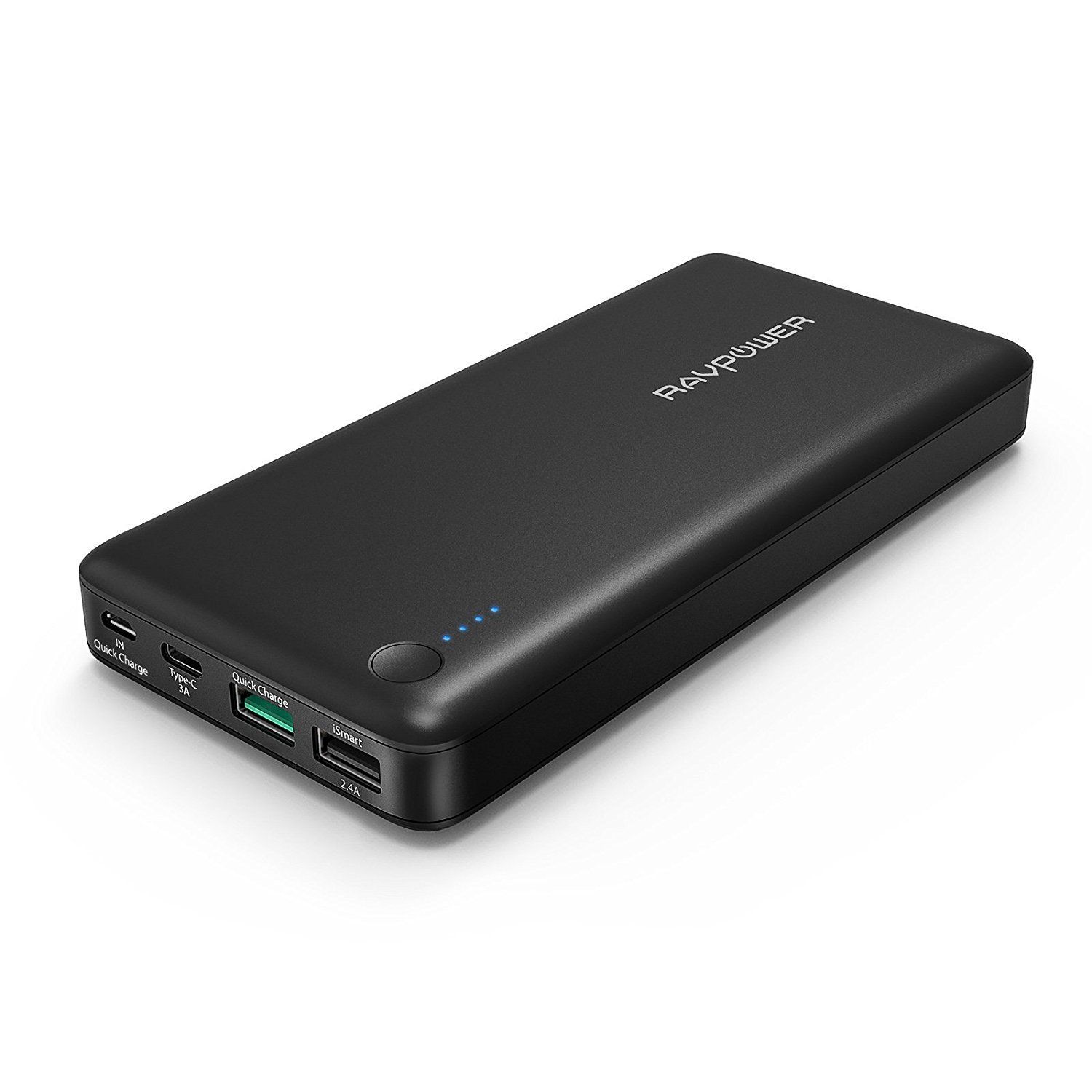 RavPower USB-C Portable Power Bank
USB battery packs have become an almost-essential part of travel these days, helping us to keep our gadgets well charged while on the go. So much so that I never leave home without one, as even on a short trip you never know when you’re going to get stranded somewhere or find yourself running low on juice.

The new USB-C Portable Charger from RavPower comes with a 20,100 mAh battery, which is enough to recharge most smartphones as much as five times. It also is equipped with a USB QuickCharge 3.0 port (both in and out) for quickly powering up any device that uses standard USB cables. But the battery pack also has a USB-C (PD) port for devices that support that standard as well, allowing them to power up much more quickly. The battery back can even be recharged using the exact same port, as it can auto-sense which direction power needs to flow –– sending it to a device that is plugged in or receiving it from an external charger.

The battery pack is very durable, surprisingly lightweight, and airplane friendly, making it a great choice for frequent travelers. I like that I can fast-charge my new iPad Pro using the USB-C port, while also plugging in my phone or other gadgets too. I also appreciate the compact design of the battery pack, which priced at $54.99 delivers a lot of bang for the buck. 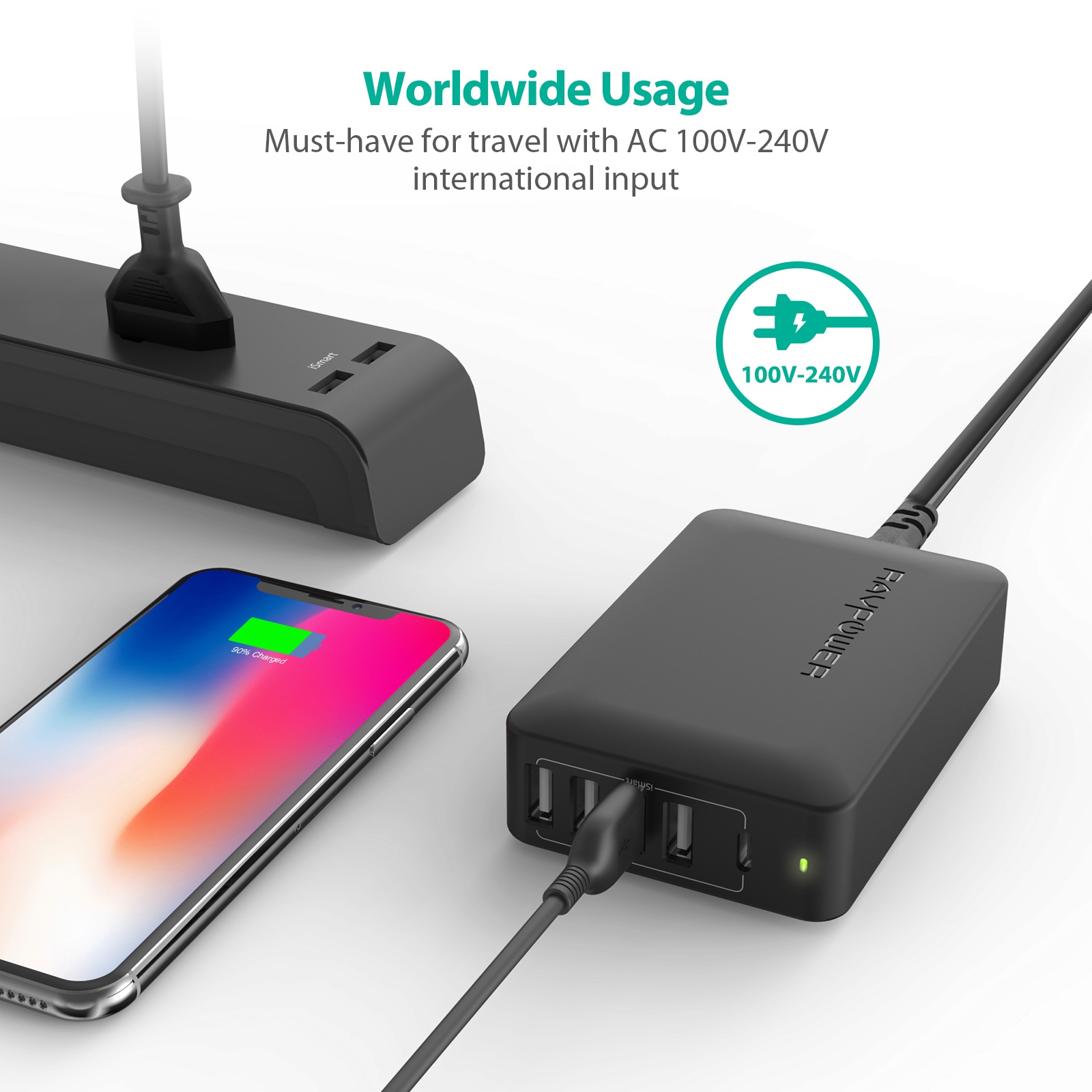 RavPower USB-C 5-Port Desk Charger
I spend a lot of time in hotels and one of my pet peeves is not having enough outlets to recharge all of my various gadgets. One way that I’ve solved this over the years is bringing a multi-port USB wall adapter along with me, which had made life a lot easier. Recently however, I upgraded to a new RavPower USB-C 5-port model, which brings some extra functionality I’ve already come to love.

One of the things that appealed to me about this charger is that it not only includes four standard USB ports, but a fully-powered USB-C PD port too. That means I can charge pretty much everything I take with me and have room for a friend to plug in their devices as well. The inclusion of the 45-watt USB-C port means faster and more efficient charging for devices that support it, which will certainly come in handy as USB-C grows in prominence.

But perhaps my favorite upgrade over my previous multi-port charger is that this one comes with a long extension cord that allows it to be plugged into award hotel AC outlets much more securely. My previous wall charger plugged directly into those outlets, but often came loose or didn’t seat securely into place. That isn’t the case any longer and this new model has already proven its worth. It’s even handy to have at the airport, where charging outlets can sometimes be in short supply. If you want to make a lot of friends very quickly, plug this in and let others share the juice. At $27.99, it’ll be the best investment you’ve ever made. 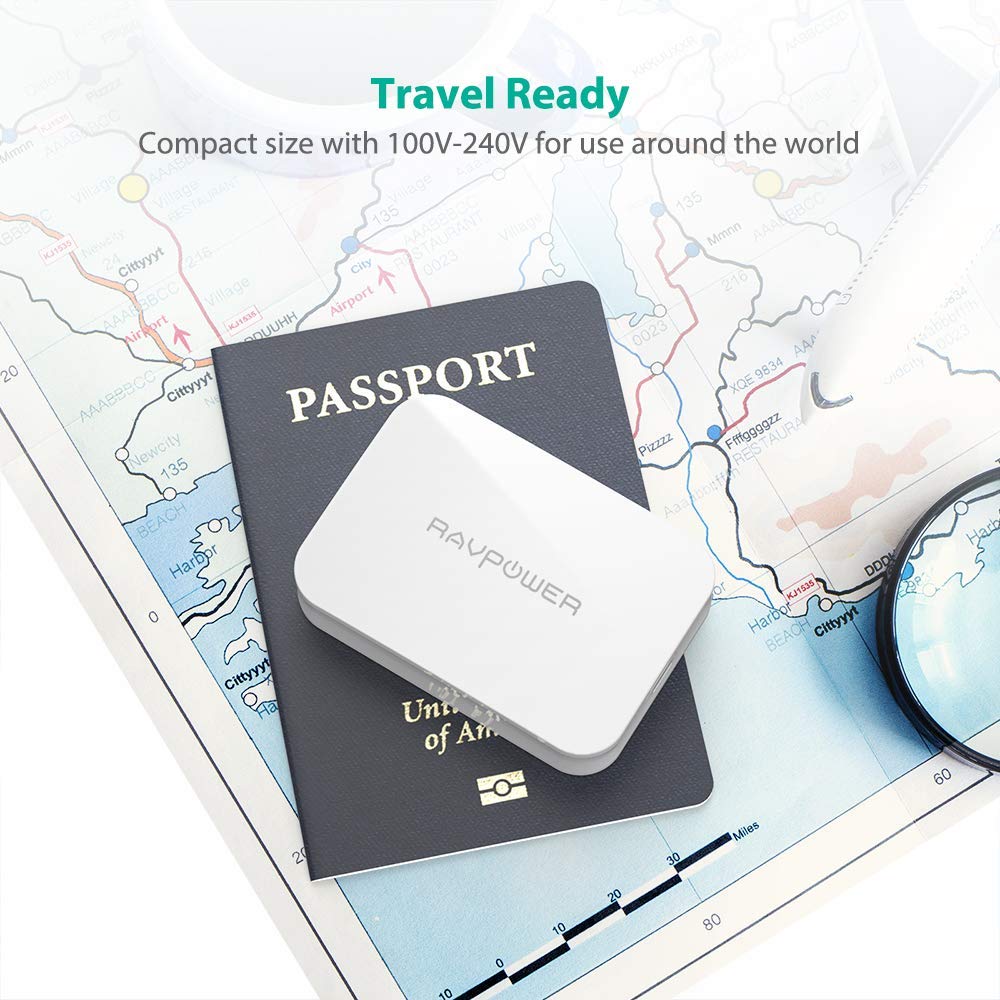 RavPower USB-C 45-Watt Wall Charger
If you’ve ever owned an Apple device before, it probably doesn’t come as a surprise that the company shipped the iPad pro with a charger that works, but isn’t exactly as powerful as you’d like. To charge faster and more efficiently, the 18-watt model that is included in the box just doesn’t cut it. Thankfully, RavPower offers an excellent alternative.

The company’s new 45-Watt USB-C PD option only provides a single port, but it is so thin, small, and light that it is worth bring with you on any trip. In fact, this charger isn’t much larger than the one Apple shipped with the iPad, and yet it offers much more power and speed.

As you would expect, the charger is equipped for use around the world, with no problems adapting to different voltages for wherever you go. If you’re using USB-C devices, whether it’s a laptop, tablet, phone, or other gadget, this will be an essential item for your carry-on bag. For me, this charger allows me to leave my Apple one at home and bring this one instead, gaining a much batter option without sacrificing size or weight.

Priced at $54.95, it’s priced quite well too, especially when you compare it to Apple’s 18-watt model, which sells for $29, but charges at less than half the speed.