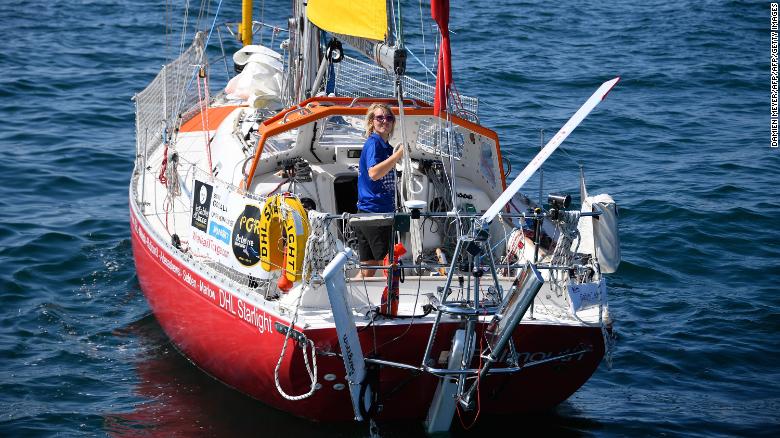 It has been a harrowing week for round-the-world sailor Susie Goodall. The 29-year old woman was taking part in the 2018 Golden Globe Race when a massive storm hit her position in the Southern Ocean, leaving her boat in tatters and its captain stranded in one of the harshest and most unforgiving environments on the planet. Fortunately, she’s now been rescued and has arrived back on dry land today.

Goodall, along with the rest of the Golden Globe competitors, set off on the round-the-world race back on July 1, which means the GGR has been going for more than 166 days straight at this point. This incredibly grueling event, which I told you about back when it started, tasks participants with covering 30,000 miles nonstop and solo, without coming ashore or receiving assistance. At the start of the event, 18 individuals set out from Les Sables d’Olonne in France, with the hopes of becoming the first to circumnavigate the globe and return to that location. Now, just five remain.

The young British woman was the only woman in the field and was holding her own with the older, more experienced men who are continuing on. But on December 5, while sailing about 2000 miles (3218 km) west of South America an incredibly intense and ferocious storm bore down on her area. That storm snapped her ship’s mast and knocked Susie unconscious for a time. When she woke up, she found herself alone, stranded, and with a severely damaged vessel that was impossible to repair at sea.

Goodall worked with GGR staff, who helped coordinate a rescue. Thankfully, late last week she was take aboard a passing cargo ship, where she has been traveling on her way back to shore. Today, she arrive in Chile, where she’ll now presumably being her travels home. By all accounts she is in good spirits and physical condition, having survived an ordeal that most of us can only imagine.

The Golden Globe Race is a revivable of a legendary race that originally took place back in 1968, with nine men sailing in the event. Only one made it to the finish line, with others suffering a wide variety of heartache and tragedy along the way. The 2018 version looked to revive that challenge, and so far it is living up to the legacy of the original GGR. The five competitors who remain still have a long way to go before they are done, and the ocean doesn’t look to be doing them any favors.