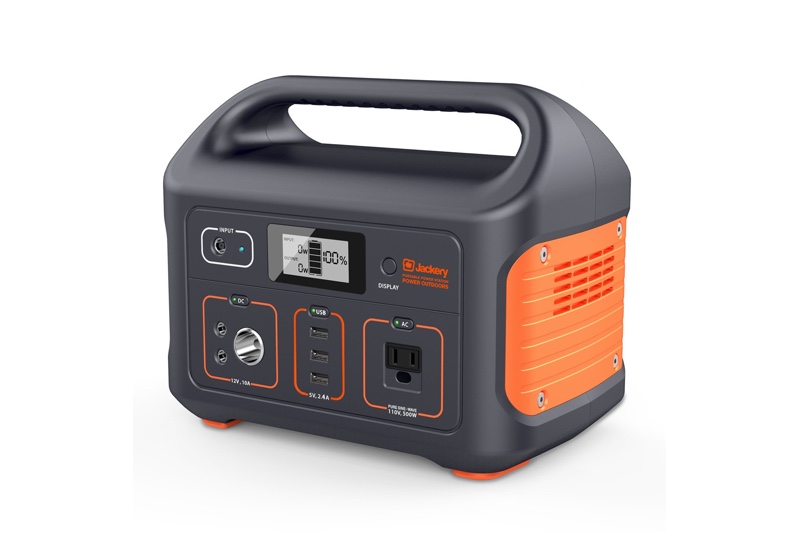 Over the past couple of years, I’ve had the opportunity to review several portable power stations here on The Adventure Blog, including at least four different models ranging from the Explorer 200 to the new HLS290 that is co-branded with Honda. In each case, I found them very well-made options for keeping our important gadgets and tech items charged while on the go.

While they provide a reasonable amount of power, none of them was ready to compete with the large power stations designed for use in expedition-length adventures. That all changes with the release of the new Jackery Explorer 500, which brings more power, more outlets, and more of everything to this segment of the outdoor space.

With its signature orange and gray body style and large integrated handle on top, it only takes one look at the Explorer 500 to realize that it comes from Jackery. This model resembles the smaller Explorer 160 and Explorer 240 very closely, mimicking their design in just about every way.

However, the Explorer 500 is much larger as the case needed to be bigger to accommodate its massive 518 watt-hours (144,400 mAh) battery. That power cell can put out a steady flow of 500 watts but can surge up to 1000 if necessary.

As a result, Jackery’s latest power station can provide far more portable energy than its processors. It also gets a lot of bulkier in the process, with the weight rising to 13.32 pounds (6 kg), which is still lighter than most of the competition.

The bigger battery means the Explorer 500 can power and recharge larger devices, though, making the trade off of weight and portability worth it for those who need this much juice. Jackery says that it can run a mini-fridge at your tailgate party or LCD TV and LED lights.

A 32″ television can stay on for as much as seven hours, while LED lights can burn for more than 45. Meanwhile, the battery can also recharge a MacBook 12″ laptop or a drone for as much as nine times. Need to charge a smartphone or tablet instead? This thing will be able to keep you going for weeks at a time.

The Explorer 500 is equipped with a single AC power outlet like the one found in your home. It also includes a 12-volt port, which is the same as the ones found in your car. Additionally, there are three standard USB ports and two DC ports, all of which are very handy for keeping an array of gadgets and appliances running in the field.

That said, I would have liked to have seen a couple more USB ports, particularly USB-C ports, on the power station. At this point, USB-C is quickly becoming the defect standard for many gadgets, and including a few of those ports would have given the Explorer 500 a bit of future-proofing.

A universal DC in port allows users to recharge the Explorer 500 through a variety of methods. An included AC adapter requires about 7.5 hours to recharge via an AC wall outlet. The power station can also be recharged in the car using a 12-volt DC adapter in about 16 hours or using a solar panel, with charging times varying based on several factors.

A larger solar panel, placed in direct sunlight, will be much faster than a smaller model on a cloudy day. Either way, the substantially larger battery found in this model will require more charging time than you would expect.

Other features of the Explorer 500 include a built-in LCD panel that provides good information on the device’s current battery level and the amount of power flowing in and out of it. There is also a built-in LED flashlight that provides a nice amount of light in emergency situations and can literally run for days on the Explorer 500’s battery pack.

If you’re familiar with Jackery’s other portable power stations, there really aren’t many surprises here. It must be like the other models, but with a few additional ports and a much larger battery. While this doesn’t compete with some of the larger, high-end models from Goal Zero, it does slot in nicely at a size and price point where it stacks up with the completion favorably.

My only nitpick is that I wish it had one or two USB-C ports, preferably with power delivery. Other than that, it’s a good all-around power station that will meet the needs of a large group of car campers, an expedition heading to base camp, or mobile outdoor professionals that need to keep their devices charged while off the grid. That includes everything from laptops and smartphones to cameras, tablets, and drones too.

The Jackery Explorer 500 is a cost-effective way to bring plenty of clean, silent power to your campsite. It is tough, durable, and reasonably lightweight, considering the battery’s size and the ports that it offers. If you require a lot of portable power, this is a great option that goes fairly easy on the wallet.