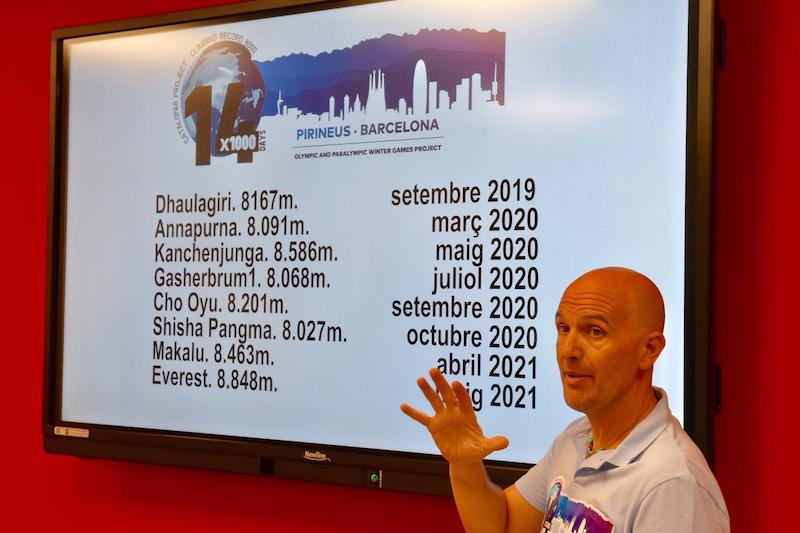 While the mountaineering community has been rightfully dazzled by the display of strength and determination that has been shown by Nims Purja throughout his Project Possible expedition, there is another mountaineer doing something similar who has tended to go a bit below the radar.

Spanish climber Sergi Mingote has also been systematically knocking off 8000-meter peaks, having climbed six of them over the span of 367 days. What makes his mark all the more impressive is that each of those climbs has been done without the use of bottled oxygen, which is a much more difficulty feat to pull off. Now, Mingote has laid out a plan to bag the remaining eight big mountains, which he hopes to accomplish in a total of 1000 days.

Mingote tells Explorer’s Web that he actually has about 600 days left to complete his quest, because he is starting the clock from his July 16, 2018 summit of Broad Peak. That buys him a bit of extra time, but not much which means he has to be efficient and economical with his time. To that end, he’ll depart for Nepal next week where the plan is to summit Dhaulagiri this fall.

That will be his last expedition for 2019, but he has plenty on tap for 2020. If all goes according to plan, he’ll attempt Annapurna next March, followed by Kangchenjunga in May.

Than it’s own to Gasherbrum 1 in the Karakoram in July, followed by Cho Oyu in September and Shishapangma in October, provided he can get permits to climb in Tibet. That leaves Makalu and Everest for 2021 in April and May respectively.

If successful, Mingote obviously won’t be the first person to have climbed all of the 8000-meter mountains without oxygen, but he’ll have done it faster than anyone else. The recovery time usually needs to be longer following a no-Os climb and understandably so.

But Sergi has shown a great deal of strength and the ability to bounce back quickly from those efforts. And since he’s saving Everest for last, he’ll have his highest-altitude endeavor for the final challenge.

This is arguably a more impressive endeavor than even what Nims is undertaking. Yes, the former Gurkha soldier will most likely complete his climbs at a faster rate, but he is using oxygen throughout. What Mingote is doing is simply superhuman and will be yet another incredible endeavor to watch unfold. We’ll keep you posted on his progress.