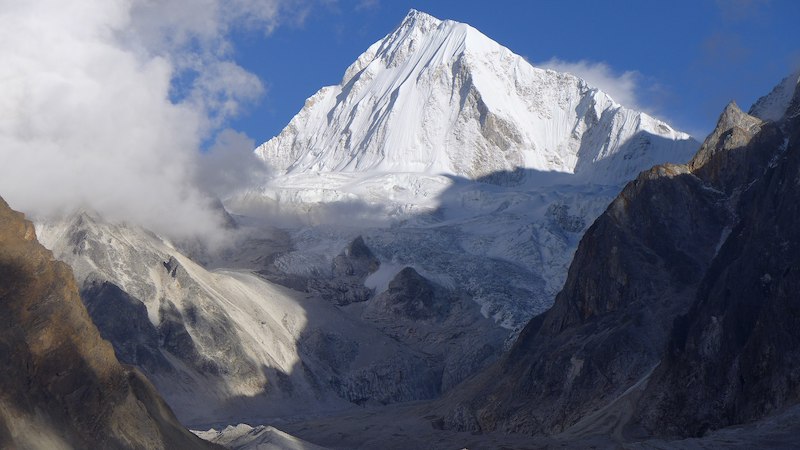 As mentioned in a post last week, the 2019 fall climbing season in the Himalaya may be over on the 8000-meter peaks, but some of the so-called lesser mountains are still seeing some action. Unfortunately, the news from one of those peaks isn’t good today, as a Spanish climber had perished while descending on Himlung Himal after a successful summit of that mountain.

The Himalayan Times reports that 44-year old Fernando Sanchez Grassa passed away in Camp 3 on the 7126-mere (23,379 ft) over the weekend. He, along with Juan Carlos Del Cerro Milan and Jesus Del Cero Millan reached the summit of the Himlung Himal on Friday, while five other members of the team abandoned their attempt at their high camp.

While on the descent, Grassa contracted snow blindness, but was able to continue on to the campsite, where he later died. The rest of the team has descended to Base Camp, where efforts are underway to retrieve his body.

Our convinces go out to Fernando’s friends and family. He was a very strong and experienced climber and this story is a reminder that the mountains can be difficult and dangerous to us all. Hopefully the team will be able to collect his remains and bring closure to those who were close to him.

Meanwhile, fresh off his completion of the Project Possible expedition and a summit of Shishapangma, Nirmal “Nims” Purja isn’t taking much time to rest. The former Gurkha soldier turned record-setting climber is now off to Ama Dablam, where he will guide clients to the summit of that mountain.

In a post to Facebook, Nims he is working with Elite Himalayan Adventures and will celebrate Remembrance Day on the summit of the mountain. That is a day set aside to give thanks for the soldiers who have fallen in combat. This year, it comes on November 11, which is next Monday. Apparently, the plan is to summit Ama Dablam, along with the clients, in a week’s time.

We will likely see a few more brief reports of successful expeditions to the Himalaya before the season is officially done. Early November is still a popular time for climbing in Nepal, even though the 8000-meter peaks have wrapped up for the year. Hopefully the news won’t be tragic moving forward however. Climb safely everyone!

3 thoughts on “Himalaya Fall 2019: Death on Himlung Himal and No Rest for Nims”