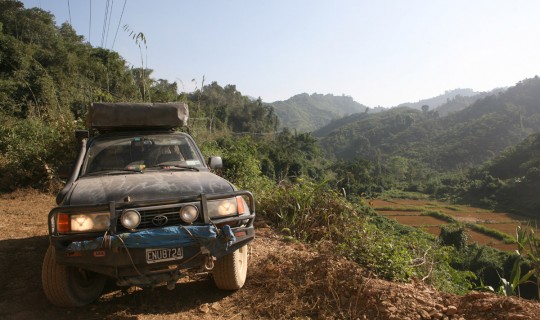 Way back in November of 2009 I wrote a piece about the Trans World Expedition, an around the world drive that was being undertaken by a man named Nicolas Rapp, who had quit his job working for the Associated Press to set out on this adventure. Now, 14 months later, Rapp is nearing the end of that journey, with probably the easiest leg yet to come.

Prior to his departure, Rapp purchased a 1996 Toyota Land Cruiser, which he promptly outfitted with reinforced suspension and bumpers. He also added a custom storage system and a roof top tent to help complete what would become his home while he was on the road for months on end. The vehicle seems to have served Nicholas well, but at the moment, it is aboard a freighter and bound for Los Angeles.

According to his latest Tweets, Rapp arrived in Tokyo, Japan yesterday. He is likely to spend some time there before he hops a flight to LA himself, where he’ll catch up with his trusty Land Cruiser. After that, he’ll hit the road once again, this time striking out across the U.S. and back towards New York City, where the journey first began. While a cross-country road trip through the U.S. is quite fun and an adventure all it’s own, it hardly compares with driving through South America, Africa, or Asia. I’d say Nicolas is just about safely into the home stretch at this point of his trip.

When I first wrote about this story, I noted that I thought that this sounded like a great way to see the world and that I’d love to buy a Land Cruiser and do something similar. That sentiment still stands! This is an epic road trip, and I can’t think of a better way to really experience a destination, or the get to know the people and culture there, then by driving through the landscapes. I’m sure Nicolas has lots of great stories from the road to share and the blog posts to his home page are probably just the beginning.