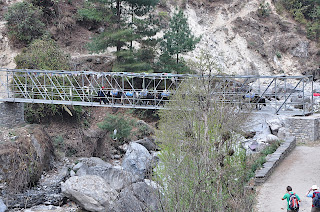 The climbing hasn’t exactly begun yet, but the climbers in the Himalaya are on the move. There have been a number of reports indicating that the weather has cleared, at least for now, and flights to Lukla are on schedule. Well, on schedule by Nepali terms anyway.

Arriving in Lukla is the first stage of the climb, even if it is still quite a long way from the mountain. From there, the climbers will actually descend a short distance for the first day, before making the long climb up to Namche Bazaar and their first rest day. It is all part of the early acclimatization process, and even though it is merely a trek at this stage, it all starts to prepare them for the challenge ahead.

Alan Arnette sent out his first audio dispatch of the season, and from the sounds of things, he is more than happy to have arrived in Lukla and to be back in the Khumbu Valley. He arrived in Lukla yesterday and made the long, slow slog up Namche Hill today. This is all old hat for Allen, who has been to Everest three times previously, but you can tell that there is some excitement in the air none the less.

Allen is climbing as part of the International Mountain Guides team, and they posted an update to their blog today as well. In that update they indicated that the entire team, including a group of trekkers, arrived in Lukla yesterday, but perhaps more importantly, the preparations in Base Camp are nearly complete, which means it’ll be a nice comfy place to stay when they all arrive in a week or so. The tent platforms are all built, and the lead Sherpas are returning to Namche Bazaar today to count the oxygen bottles for their garbage deposit and register the climbers for permits to pass through the dreaded Khumbu Icefalls, the most dangerous place on the mountain.

Meanwhile, the Altitude Junkies team is now assembling in Kathmandu and preparing for their trek to EBC. They’ll depart in two separate groups, one on the 1st and the other on the 2nd of April. Similarly, the Himex team is leaving for Lukla today and expect to be in Base Camp on the 9th. They share all kinds of details about their climbing group, and a host of new upgrades for BC, in this post.

Also back on Everest this year is David Tait, who has made three successful summits of Everest, including a complete traverse of the mountain from the North to the South side. Tait vowed that he was through with Everest a few years back, but just like clockwork, he still returns each spring. He is currently in Kathmandu and organizing his gear, but will be off to Lukla shortly, and expects to be in Base Camp by the 7th of April.

Plenty more to come. Expect some great images from the EBC trek over the next few days as the climbers make their way to the mountain. Having done that trek myself last year, I know full well what they’re up to and where they are staying along the way. Reading about their travels is making me miss the Khumbu at the moment.