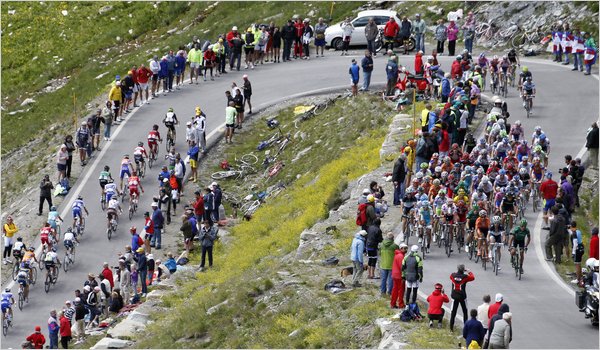 Heading into today’s Stage 18 of the Tour de France, we knew that we could expect some fireworks between the top contenders in the GC. But what we didn’t know was that one of those contenders would put in an amazing attack, while another would see his hopes of winning dashed beyond repair.

The 200.5km (124.5 mile) stage ran between Pinerolo and Galibier-Serre Chevalier and featured high mountain passes, and three uncategorized climbs to sap the strength of the riders in the Peloton. The ride started as expected, with the top riders all shadowing one another, waiting patiently, and biding their time. But then, something unexpected happened 60km into the ride. Andy Schleck went on the attack and left his rivals behind while building a huge lead through the final climbs of the day. At one point, he was as much as 4 minutes out, and was the virtual leader of the Tour. He even caught an earlier breakaway, and steamed passed them, eventually earning a stage win, crossing the finish line more than 2 minutes ahead of his brother Frank, who came in second and 2:15 in front of Cadel Evans, who did most of the work to reel Andy back in on the last climb of the day. The Yellow Jersey, on the shoulders of Thomas Voeckler, was in that group as well, allowing the tough Frenchman to hold on to the lead for one more day.

This big move was an impressive display of strength and extremely bold on the part of Schleck, who needed to be aggressive in order to gain some time and put himself into position to win the race. The gamble paid off, as he is now in second place, just 15 seconds behind Voeckler. Brother Frank holds down third place, 1:08 back, while Australian Cadel Evans is now in fourth, 1:12 off the lead. Tomorrow, on the slopes of Alpe-d’Huez, these men should be throwing attacks at one another to decide who will have the Maillot Jaune headed into Saturday’s time trial.

One name conspicuously absent from that list is defending champ Alberto Contador. The Spanish rider lost precious time today and was dropped from the pack on the final climb when Evans made a move to pull in Andy. Contador looked like he was in pain on that part of the ride, and as a result, he is now sitting in 7th place, 4:44 behind Voeckler. With the attack from Andy today, combined with his inability to follow the lead group, it now seems that Contador’s chances of winning the race are over, and he may well struggle to even get into the top five. He’ll have an opportunity to show his mettle tomorrow, on the final mountain stage of the year. He is also a fantastic time trialist, so he may hope to make up some time on Saturday as well.

No matter who ends up heading to Paris in Yellow, you have to give Thomas Voeckler the respect he is due. The Frenchman has carried the Maillot Jaune with honor and dignity for his country, and as nearly every new stage began, everyone thought “this will be the day” that he drops the Jersey. It hasn’t happened yet, and while it seems inevitable tomorrow, it doesn’t take anything away from how well he has ridden and how well he has defended the lead. Voeckler is what the Tour is all about, and he has given it his all, as evidenced by the final shots of him today at the finish line. Clearly, he was spent.

As for the other jersey competitions, Mark Cavendish keeps the Green and really doesn’t face any competition until the race reaches the Champs-Élysées on Sunday. Jelle Vanendert kept the Polka Dot Jersey, but Andy Schleck moved into third place just four points back. He’s likely to gain more points tomorrow, which could lead to the possibility of a winner taking home both the Yellow and the Polka Dot in the same year. Rein Taaramae of Cofidis claimed the White Jersey today as the best young rider in the field as well.

Tomorrow’s stage is a short, but brutal one. Just 109.5km (68 miles) in length, it features an awful lot of climbing. THings get started early with a Category 1 climb, followed almost immediately by a Beyond Category climb up the Col du Galbier. From there, it is a long, steady descent, that will test the riders technical skills, but give their legs a bit of a break, before the final climb of the day, a tough slog up Alpe-d’Huez, a Beyond Category climb that is amongst the most storied and feared in the history of Le Tour. It will be on those final slopes that the fate of the riders will be decided.

The question now is, does Andy Schleck have anything left in the tank for another tough mountain stage tomorrow? He needs 15 seconds to shake Voeckler out of the Yellow Jersey, but more importantly, he needs to put more time between himself and Cadel Evans. Neither of the Schleck brothers are particularly great time trialists, and they shouldn’t feel comfortable with anything less than a two minute lead on Evans, who excels in the discipline. If Andy falters, will Frank take up the mantle for Team Leopard-Trek? There is going to be a lot more high drama in the High Alps tomorrow. Don’t miss it!