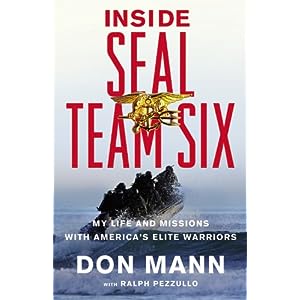 Occasionally I like to use this blog to spotlight some of the great projects that my friends are working on, and that’s the case with this post. My friend, and Primal Quest boss, Don Mann is about to release what looks like a fantastic book entitled Inside SEAL Team Six: My Life and Missions with America’s Elite Warriors.

For many fans of adventure racing, Don is well known for masterminding some of the most challenging races the sport has ever seen. A fantastic endurance athlete in his own right, he has also competed in his fair share of adventure races triathlons, Iron Man’s and so on. But Don is also a Navy SEAL, serving with the elite group for more than 17 years, eight of which were spent with SEAL Team Six, the unit that took down Osama Bin Laden this past May.

In his new book, Don shares his experiences working with the exceptional men who are a part of the SEAL’s – many of whom he has trained himself. He spins tales of his own adventures as part of the team, many of which he hasn’t been able to share until now. The specific details of some still can’t be completely told, and the the press release for the book says that three different government agencies took exception with some of what he revealed, forcing the redaction of more than 5000 words.

I have no doubt that this book will will make for fascinating reading, giving the account of Don’s experiences from around the globe, including missions in Iraq, Afghanistan, Somalia, Panama, and beyond. It will go on sale in just a few weeks, December 5th to be exact, and will be available in hardback as well as on the Kindle, iPad, and other tablet devices.

On a personal note, having gotten to know Don while working on Primal Quest, I can tell you that he is a warm, personable guy who is a lot of fun to be around. I am very much looking forward to reading his story and learning more about his life. Look for a full review in a few weeks time.