It was a very windy weekend on the world’s tallest peak. Those strong, sustained winds kept many of the climbers in place for the past few days, although the hardworking Sherpas were still on the move carrying supplies to the high camps. Camp 4 has now been established at 7920 meters (26,000 ft) just below the proverbial “death zone” and if reports are to be believed, the lines to the summit will be in place today. If that work is completed as expected, it may be just in time. The forecast calls for an increase in wind speed over the next few days, which will no doubt drive everyone off the mountian and back into Base Camp where they’ll await their eventual summit bids or one last rotation before they start their final ascents.

The weekend was productive in the sense that many of the Sherpa teams were busy carrying gear up to both C3 and 4. Several of the larger teams are now full stocked for their summit bids with all of the gear, supplies and bottled oxygen they’ll need for their approach. One of those teams is the IMG squad, who carried loads up the mountain the past two days despite the windy conditions. But they’ve collapsed their tents at Camp 3 to prevent them from being shredded in the winds.

The team is also reporting sad news as well as one of their Sherpas passed away over the weekend. DaRita Sherpa, from the village of Phortse, spent the night at Camp 3 on Saturday and reportedly was up and preparing to descend the mountain yesterday. All seemed fine when he suddenly reported that he was feeling dizzy. He decided to rest in his tent for a time, but while he was lying down he suddenly stopped breathing. His teammates attempted CPR, but to no avail and DaRita died on the spot. His body was carried down to Camp 2 and retrieved by a helicopter to take back to his family in Phortse. Condolences to his team, friends and family.
The RMI team is preparing to start their last acclimatization rotation with the team heading back up the mountain today. They’ll spend some time up in Camp 3 and may even sleep there with their oxygen masks on. That is a good way for the climbers to get use to wearing the masks and serves as a test to make sure the equipment is working properly before heading higher. They’ll probably pass the Adventure Consultants on the way up, as that team climbed to C3 yesterday before going back down to C2 for the night. They’ll now start descending back to BC for a rest today. Meanwhile, the Peak Freaks are still down the Khumbu Valley enjoying some richer air in the village of Pheriche. Their rotations are completely done and now they just wait for the rope fixing to be finished and a good weather window to open.

One man who is back in BC but isn’t necessarily happy about it is Davit Tait. The British climber already has five successful summits to his name and is hoping to add one more to his resume this year. He was up in Camp 2 over the weekend and was desperately hoping to be able to follow the Sherpas fixing the ropes all the way to the summit, no doubt to avoid the impending traffic jams that will soon come. But with the wind speed picking up it would be impossible for him to go to the summit so his team leader, Russell Brice of Himex, called him back down. Discretion is the better part of valor after all. 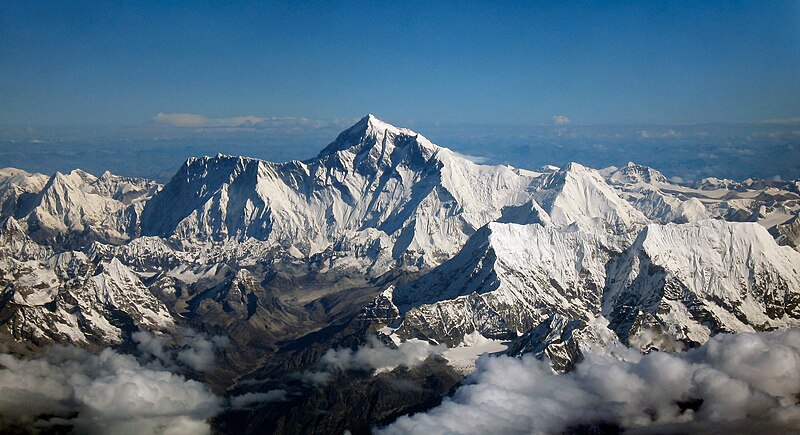 The independent team of Denis Urubko and Alexei Bolotov are preparing to make their attempt at a new route along the Southwest Ridge. Russian Climb reports that the duo are now up near 8000 meters (26,246 ft) and keeping an eye on the weather. Alexei is reportedly sick however, so we’ll have to wait to see if his ailment will endanger the expedition. The two men are climbing in alpine style and without bottled oxygen, which of course requires them to be in top form.

On the North Side of the mountain the high winds are making it nearly unbearable to be high up the mountain. The Altitude Junkies report that their Sherpa team has returned to BC following a two week stay at Advanced Base Camp or higher. The Sherpas say that ABC is so bad due to high winds at the moment that couldn’t stay any longer. The forecasts aren’t food for the next several days either, but the team is keeping its fingers crossed that the shift in the jet stream will come soon, giving them a chance to go back up. Edita Nichols, who is climbing as part of this team, says they hope to see a lull in the winds sometime around May 8-10. She and the rest of the team are eyeing a May 12 date for the start of their next push up the mountain.

Sadly there is news of fatalities from this side of Everest as well. The 7 Summits Club reports that one of their team – Sergey Ponomarev – died yesterday, presumably of a heart attack, while hiking the trail up to ABC. Ponomarev was in ABC prior to his death and decided to climb higher to meet some of his teammates who were descending from the summit of the 7600 meter (24,934 ft) Changtse. While on the trail he suddenly felt ill and fell over on the spot. All attempts to resuscitate him failed. Again, condolences to friends and family.

It looks as if the rope fixing on the South Side will wrap up as expected today or tomorrow, but these high winds have everyone concerned at the moment. Since the forecast won’t improve until later in the week, final rotations could be delayed for a bit. Still, we are on track to have the first summits of the season mid to late next week. That is, provided the weather decides to cooperate. For now, we’ll just have to wait and watch, just like the climbers themselves.