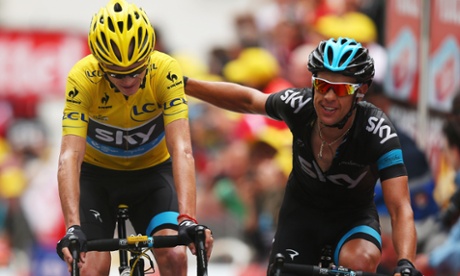 Today was a big day in the 2013 Tour de France, but we knew it would be back when the course was originally announced. The 168 km (104.38 mile) stage ran from Gap to the summit of the famed Alpe d’Huez, which had to be climbed not once but twice in the same stage. If you’re a fan of the Tour, you already know the historical importance of that mountain, with its 21 switchbacks, each of which bears the names of former Tour winners who also prevailed on the historic climb. Heading into the day, we wondered if race leader Chris Froome would also carve his name onto one turns, but by the end we were left wondering how much the Sky rider still had left in the tank. For the first time in the race he actually looked vulnerable.

Early in the day a group of breakaway riders made a move to claim glory on the stage. That breakaway included the likes of Tejay Van Garderen and Christophe Riblon, the two men who would ultimately battle it out for the stage win. Van Garderen looked great throughout the stage but a mechanical issue with his bike on the descent of the first ascent of Alpe d’Huez forced him to the side of the road to wait for assistance, When he finally got back going again he expanded a lot of energy catching up with the other breakaway riders. Eventually he would leave them in his wake however and ride on alone, only to be caught by Riblon on the approach to the summit finish. The American had no more kick in his legs and even though he rode hard the entire day, he wasn’t able to hang on for the stage win. Instead it was Riblon who looked fresh at the top of the mountain as he earned France it’s first victory in this year’s race.

Late in the race, Froome made his own move on the final climb in an effort gain more time on Alberto Contador, who sits in second place, now more than five minutes off the pace. The Brit was also looking to limit the damage that would be done by Movistar’s young rider Nairo Alexander Quintana Rojas, who looked strong on the climb and pulled back more than a minute on the leader, even though he doesn’t appear to be a major threat for the Yellow Jersey. During that climb however, Froome clearly looked like he was struggling, perhaps for the first time in the past two Tour de France races. Thankfully his teammate Richie Porte was there to help him up to the line, but it was unusual to see vulnerability in the man who has been in Yellow for more than a week now.

The next two days are going to be interesting. While I don’t think Froome was close to cracking today, he clearly showed the strain of the big climb. Tomorrow will be a 204 km (126.75 mile) ride from Bourg d’Oisans to Le Grand Bornand that will feature more big climbs, including two Beyond Category monsters in the early going, but it has a down hill finish which should limit the damage unless someone decides to challenge early. Saturday’s stage will end with another massive climb on a BC summit, which could be the place for someone to challenge the standings. Realistically speaking though, it will still take some monumental effort for Froome to not ride into Paris on Sunday in the Yellow Jersey. He seems a lock to win provided something drastic doesn’t happen. Still, with Quintana Rojas now in third place and looking strong today, who knows what he’ll do. He may at least challenge Contador for second place considering just 21 seconds separate the two men.

There was no major changes to the standings in the Green Jersey today. Peter Sagan continues to hold a commanding lead and should also arrive in Paris with that jersey on his back. Froome still leads in the King of the Mountain competition as well, although only a few points now separate him from Quintana Rojas. The battle for the Polka Dot Jersey will be settled over the next two days too. The Colombian rider has a stranglehold on the White Jersey that goes to the best rider under the age of 25 as well, so honestly there isn’t much drama left in the Tour, other than watching individual efforts out on the course.

The next two days should still be a lot of fun to watch as they riders continue through the Alps. On Sunday, they’ll turn towards Paris and the sprinters will get one last chance to flash their speed on the Champs Élysées. That’s always a wild and chaotic affair that makes for entertaining television. This year that will take place in the evening, giving it a much different feel in than it has it the past.

I can’t believe we’re almost through another Tour. It seems like it goes way too quickly and since I haven’t had the chance to follow it as closely this year as I have in years past, I’m feel particularly sad that it is already about to go away again. Lets hope these final three days are good ones.