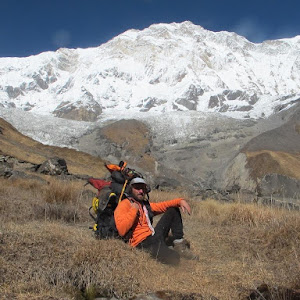 Last Friday ExWeb broke the news that a team of French climbers had successfully climbed Annapurna along the very difficult South Face. As we all know, any summit of Annapurna is always an impressive one, but this one was especially so thanks to the heavy snows that have fallen in the Himalaya following Cyclone Phailin making landfall a few weeks back. At the time, we knew very few details of the climb other than that Yannick Graziani and Stephane Benoist were able to top out after spending  a week on the mountain. We were also waiting for news on their successful descent, which still hadn’t happened the last time we had an update.

Yesterday, ExWeb reported that Yannick and Stephane actually had to be evacuated from Annapurna after suffering frostbite on the descent. The details still remain scant but it appears that they struggled on the way back down but were able to reach Base Camp. Once there, it was determined that they would need medical attention and the duo were flown back to Kathmandu, where they are reportedly being treated now.

ExWeb speculates that the injuries weren’t particularly serious, although it is sometimes difficult to tell with frostbite, particularly early on. Hopefully Yannick and Stephane won’t be losing any digits and they’ll be back in the mountain soon. Considering how dangerous Annapurna can be, they should feel fortunate they got away with just a little frostbite.

They are due to return to France sometime in the next couple of days.