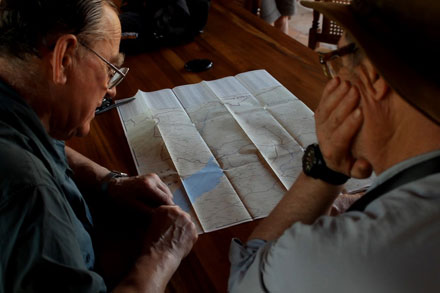 If you have been keeping up on current events lately, you probably already know about the turmoil that is going on in South Sudan, the youngest country on the planet. The nation was formed following a long struggle against leaders in Sudan, but almost since the day the nation first gained its independence, political struggles and old rivalries have threatened to break it apart. That all boiled over in mid-December and now the country is in open conflict with factions that have been rivals for years falling back into old familiar territory now that their common enemy had been defeated. At the moment, thousands of South Sudanese citizens are displaced and hundreds have been killed. It is, at times, a violent and unpredictable place, where foreigners are discouraged from traveling to.

That is the environment that explorer and anthropologist Julian Monroe Fisher is facing as he returns to South Sudan to continue his work there. He departs Austria today to launch the third phase of his Great African Expedition, a four year, multi-phase plan to explore the ethnographical make-up of central Africa and study how it has changed over the past two centuries.

Julian has also been instrumental in developing a new long distance trekking route dubbed the “Sir Samuel and Lady Florence Baker Historical Trail.” This new route, which begins in South Sudan and runs into Uganda, is more than 500 miles (805 km) in length and has been designed for backpackers and long distance hikers. The hope is that the trail will draw a much needed economic boost to the region, which lacks jobs and other resources currently.

On this visit, Fisher plans to hike the entire length of that route for the first time. That could be risky however, as the trail begins near the town of Gondokoro, which is located not far from the capital of Juba. That area has been hit hard by the current civil unrest in the country.

When I heard from Julian earlier in the day he was just preparing to leave for Africa. His contacts in the country assure him that he will be safe and that they will do what they can to securely deliver him to the trail. For his part, the explorer says that he is not concerned about his own safety and welfare but instead would like to call attention to what is happening in South Sudan. Much of the conflict stems from long standing ethnic disputes between the Dinka and Nuer people, which Fisher compares to the 1990’s conflict in Rwanda. He hopes his efforts will help draw a focus on the South Sudanese conflict that will hopefully prevent another genocide like the one that took place in Rwanda.

The current expedition is set to last up to two months and Julian will post updates from the field as he goes. Hopefully he’ll not only get the chance to hike the trail that he has been helping to develop but he’ll remain safe along its entire length. His mission there is a good example of explorers visiting dangerous places with the hope that they can help improve conditions there in the future.