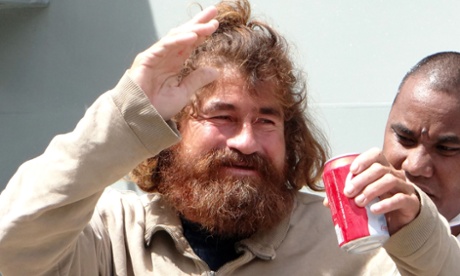 Yesterday I posted the compelling story of Jose Salvador Alvarenga, the El Salvadorian man who lived in Mexico and claims to have been adrift at sea for more than a year, living off fish, small birds, and turtles, while capturing rainwater to drink. That story was accompanied by a healthy dose of skepticism by many, who said that he looked far too fit and healthy to have spent more than 13 months at sea. Now, there is some evidence being presented from his home country that is helping to corroborate the castaway’s story.

Some of the speculation against the story came about not just because of the relative health of Alvarenga, but also because his story continued to change as he told the tale. It was also noted that there wasn’t any fishing gear aboard his boat when he washed ashore, calling into question his ability to actually catch fish to eat. But doctors have said after so long at sea, his mind wasn’t as focused and sharp as it would normally be, which helped to create the inconsistencies in his story. It is also possible that he lost his fishing gear somewhere along the way due to storms or other circumstances.

Back home, there are now reports surfacing about a small boat that went missing in a storm back in November of 2012, which is about the time that Alvarenga says he set out on his ill-timed fishing trip. His name was mentioned in regards to the incident, although the boat belonged to his boss, who originally alerted authorities.

The storm forced the small 24-foot boat out to sea, where the Pacific currents carried it away from shore. With no navigation equipment onboard, there was no way for him, or his teenage companion, to know how to get back home. The boy that was with him reportedly died a month into the ordeal, leaving Alvarenga to drift more than 6000 miles on his own.

Adding more credence to the story, Alvarenga’s family says that they were alerted to the fact that he had gone missing, and they had given him up for dead. They were relieved and overjoyed to see his photos from the Marshall Islands in the newspaper, and are looking forward to a long overdue reunion. Jose hasn’t seen his parents in more than eight years.

The castaway is due to be released from the hospital today and will soon make his way back to Mexico, before eventually going home to El Salvador. He is said to be suffering from swollen ankles, but other than that, there is little indication of the long journey across the ocean that he endured. That is leaving some still questioning the story, although there hasn’t been any other plausible way to explain him turning up on the far side of the Pacific months after he disappeared.