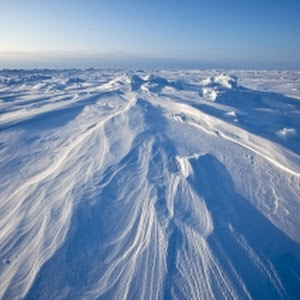 One of the true sign that the Arctic expedition season is progressing is the opening of the Barneo Ice Camp on the Russian side of the Arctic Ocean. This temporary base is built on an ice flow each year, and serves as a launching pad for those making a “last degree” journey to the North Pole. After locating a suitable spot to build this year’s base over the weekend, the Russian crews are now in place, and working to have the camp operational by its scheduled April 2 date. But in order to accomplish that feat, they have to pull of an impressive display of logistics.

This year’s Barneo camp will be located at 89º 39’N. Construction first begins by having a team of engineers, parachute out onto the ice from Russian MI-8 helicopters. Once there, they build a temporary landing strip that allows a big Ilyushin aircraft to land, and deliver the supplies they’ll need  in order to conduct operations over the next few weeks. That includes 4-season tents, food, fuel, and much more. Soon, a tent city will be built on the ice flow, which will be home to the base’s staff and visitors. Many of whom will be research scientists studying the impact of climate change on the polar ice caps. Others will be well heeled adventure travelers heading to the top of the world, with Barneo serving as their gateway to that location.

The Ice Camp serves an important purpose each year, as it is often the exit point for many of the explorers who ski to the North Pole. Since it is the closets settlement to 90ºN, the Russians often fly helicopters to that point to extract the weary travelers. They’ll do that agin this year if necessary, although at this point, the teams skiing to the North Pole don’t look like they’ll arrive while the base is still open. We’ll have to see what their plans are as the season progresses.

Speaking of those explorers, Eric Larsen and Ryan Waters continue their slow, but steady progress north. They have started to cover slightly longer distances each day, which is encouraging, although they aren’t yet up to the speeds they would like, in no small part because of conditions out on the ice. Not only are they still experiencing rough ice in certain sections, they’re also coming across patches of thin ice as well. So much so in fact, that Ryan fell through the ice on two occasions yesterday while trying to cross sections that weren’t entirely stable. In addition to being incredibly dangerous, these incidences also slowed them down dramatically. Fortunately, aside from some frozen gear, Ryan came out of the water without any significant harm done. The situation was a scary one however, and they’ll have to be more cautious in the days ahead.

The other Arctic explorer who continues to press ahead is Japanese solo-skier Yasu Ogita. His home team tells ExWeb that he is on schedule, having crossed the 84th degree last week, 20 days into the expedition. He is reportedly in good physical condition, feeling fit and strong, but has been having some challenges to mental state of health. 20 days out on the ice in these difficult conditions can be brutal on the psyche, and facing the daily grind of an Arctic expedition alone will take its toll on anyone. Hopefully he can remain focused and stay strong in the days ahead. There is still an awful long way to go before he is done.

Things didn’t improve much over the weekend for Yasu though. A blizzard blew into his location and he was estimating that it might keep him tent-bound for two days. Those are two precious days to give up when he’s already on a tight schedule. Whether or not he’ll be able to make up the time remains to be seen.

That’s all of the news from the Arctic as we start a new week. I’ll post more as things continue to progress.