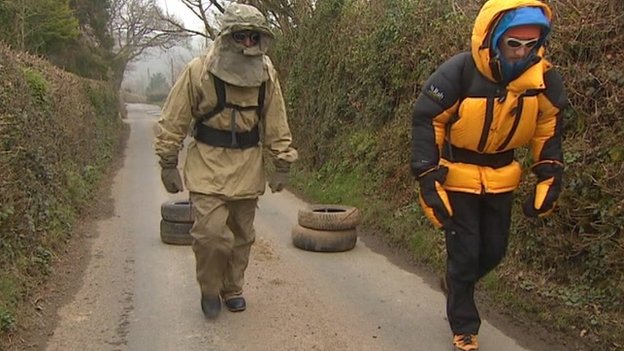 Twin British adventurers Hugo and Ross Turner are preparing to set out on a grueling expedition across Greenland that will not only test their resolve, but also aid scientific research, while simultaneously celebrating one of the greatest stories of survival in history. They’ll also bemusing the expedition to raise funds for a charity they have supported in the past that has played a crucial role in the health of one of the twins.

On April 26, Hugo and Ross will begin a 340 mile (547 km) journey on foot across Greenland. That journey is expected to take 30 days to complete as they battle tough terrain, inhospitable environments and unpredictable weather. They’ll travel on skis while pulling sleds filled with all of the gear and supplies necessary to survive behind them at all times. And if that wasn’t challenge enough, one of the men will be doing the expedition while using vintage gear from a century ago.

The twins will be part of a research project that will study how modern gear protects and aids the human body while on an extreme expedition. In this case, Ross will use vintage gear from the early 1900’s, right down to pulling a sled from that era. Meanwhile, Hugo will be outfitted in the latest and greatest equipment. They two men will then keep track of how they perform, including taking saliva samples to test for stress hormones, to see how modern gear improves performance. Having a set of identical twins as your test subjects should help to mitigate most of the genetic difference that two other adventurers might have.

The Turner twins are no strangers to physical challenges. Back in 2011/2012, they competed in the Trans-Atlantic Woodvale Rowing Race as part of a 4-man crew, finishing third in the event, but raising £300,000 (about $495,000) for spinal research. That is a topic that is close to their hearts since Hugo was injured in a swimming accident at the age of 17 and nearly lost the ability to walk. It took him six months of intensive medical treatment and therapy to recover, and now the men do what they can to support that cause.

As if all of this wasn’t motivation enough for their expedition, they have also opted to wear the vintage gear as a celebration of the 100th anniversary of Ernest Shackleton’s Endurance expedition. As you may recall, Shackleton and his men were on a voyage to explore the Antarctic when their ship, the Endurance, became trapped in the ice off the coast of the frozen continent. They managed to survive for months on end, before making a daring sea crossing in life rafts in search of help. Shackleton and his men survived that crossing, and not a single member of the crew was lost. It remains one of the greatest stories of leadership and survival in history.

Ross and Hugo have launched a crowd funding page as they seek assistance for getting their expedition off the ground. Considering the ambitious nature of their plans, it seems they can use all the help they can get. They’ve already managed to collect a couple of corporate sponsors, but they’re still seeking volunteers, promotions, and other assistance to their cause.

Good luck to the twins on their adventure in Greenland.