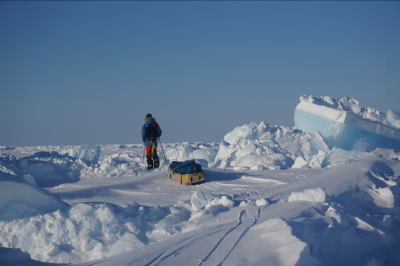 With the clocking ticking on the 2014 Arctic season, there is still quite a bit to report from up north. While we’re down to one team making its way to the North Pole, there are several heading in the opposite direction, or chasing other objectives in the Arctic at the moment. The conditions remain very difficult of course, but the potential remains for the completion of the first successful North Pole expedition in the past four years.

Eric Larsen and Ryan Waters continue to press ahead with their attempt to reach 90ºN. With time starting to become a precious commodity, they’ve now added an additional 2.5 hours of skiing to their day. After being out on the ice for 45 days, they still have 140 miles (225 km) to go, with approximately 10 days worth of food and fuel left. Simple math says they need to cover 14 miles (22.5 km) per day to reach the Pole. Preferably, they’d want to have a little extra time in there, just in case.

Fortunately, things seem to be improving for the duo. They have had better ice, and the leads that they have encountered have been frozen over as well. That has allowed them to pick up the pace some, hitting 17 nautical miles (31.4 km) in a single day. They have also passed the 87th parallel, which is a major milestone too. As they near the Pole, conditions should continue to stabilize, helping to increase their speed further. If everything comes together as it should, they have a legitimate chance of completing their expedition.

Japanese solo-skier Yasu Ogita was successfully retrieved from the ice last Wednesday. He had been traveling north for 48 days, but poor weather and ice conditions prevented him from covering the ground that he needed to in order to reach the Pole. He was tent bound on several occasions due to weather, and simple ran out of time. With food and fuel running low, he called for an extraction, and he is now back in Resolute Bay, waiting to go home.

The Expedition Hope team received a resupply over the weekend to help them on their expedition. The trio of skiers that includes Eric Phillips, Bernice Notenboom, and Martin Hartley, are traveling from the North Pole back to Cape Discovery, and have had their fair share of difficulty along the way as well. Bad weather has plagued the team as well, and negative drift has sent them further east than they had intended, so they were also planning to be relocated closer to their original course. With the resupply and relocation out of the way, they hope to get back to traveling south this week.

Over in Greenland, Eric McNair-Landry and Dixie Dansercoer continue to struggle for every mile. They are now nearly three weeks into their attempt to circumnavigate the country by kite-ski, and the weather has been almost completely uncooperative. They had hoped to use their kites to cover large distances in a single day, so far they’ve had few opportunities to kite at all. So, instead they ski along as best they can, covering 15-18 km (8-10 miles) per day, while dreaming of eventually picking up speed. They’re going to need to if they want to finish this journey. The 5000 km (3100 mile), 80 day expedition won’t be an easy one, and they are already well behind schedule for what they had harped to accomplish.

That’s all for now. I’ll post more updates as it is warranted. With Eric and Ryan inching closer to the Pole, we’ll have to keep a close eye on their progress. If they do manage to complete the journey, it’ll be one of the more impressive accomplishments in polar exploration in recent memory.