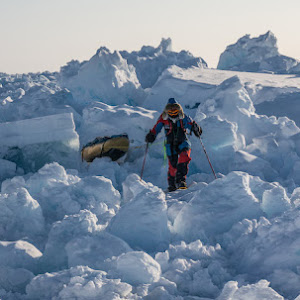 One of the expeditions that we followed closely this spring was the journey to the North Pole conducted by Eric Larsen and Ryan Waters. The two men spent 53 days traveling on foot from Cape Discovery on Ellesmere Island to the Geographic North Pole at 90ºN. It was an incredibly difficult undertaking that was both physically and mentally demanding. Now, Eric has shared some of their story with ExWeb, giving us some insights into just how challenging their expedition truly was.

In an interview published yesterday, Eric talks about the logistics of traveling to the North Pole, the wide variety of obstacles that he and Ryan faced while out on the ice, and the vast differences between conducted an expedition with support, and without. He has now made three full-distance trips to the North Pole, but this was the first time he went completely self-supported. Eric tells ExWeb that traveling in that fashion completely changes the nature of the expedition, as it doesn’t give explorers any room to wiggle. The margin for error is smaller when you’re traveling with all of your own gear and supplies, and it is more physically demanding as well.

When asked to compare the differences between traveling to the North and South Pole, as well as climbing Everest, Eric says that it is difficult to do so since they are all three so completely different. He notes that when he climbed Everest, he only spent a total of nine days on the mountain, and the rest of the time he was in Base Camp, waiting for a weather window to open. He was even able to descend to Gorak Shep to grab a coke if he wanted to.

Throughout the Arctic expedition season, I routinely said that I believe that a full-distance journey to the North Pole is the toughest achievement in the world of adventure today. Eric seems to back me up on that statement, as he told ExWeb “In my estimation, the full expedition to the North Pole easily ten times harder than Everest or the South Pole.” That should give you an indication of just how difficult this journey was.

The interview is a good one for anyone who has an interest in polar exploration or expedition logistics. A good read for sure.