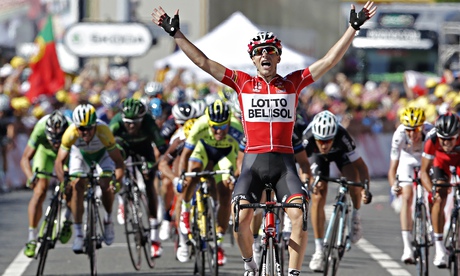 After yesterday’s rest day – the first of two in this year’s Tour de France – the riders returned to the road today for a challenging stage through a hilly section between Besançon and Oyonnax. While the route wasn’t nearly as demanding as the small mountains we saw this past weekend, it was enough to create gaps in the peloton, and allow a breakaway to survive long enough to claim a stage win for the host country, its first of the year.

For the most part, the race today didn’t offer much in the way of drama, which was to be expected following the crash-filled, crazy few days that led up to the rest day. But near the end, several teams lined up their leaders with the hope of claiming a stage win. Those teams included Cannondale, who hoped to get Peter Sagan his first stage win of the year. Ultimately those efforts fell short however, as French rider Tony Gallopin found a burst of speed in the final few kilometers that allowed him to escape his close pursuers, then hold on for the win.

Gallopin’s win had little impact on any of the various classifications in the race. Italian rider Vincenzo Nibali keeps the Yellow Jersey, and barring some disaster, will do so until the race reaches the Alps and Pyrenees at the very least. Sagan once again kept his Green Jersey as the race’s top sprinter, while  Joaquim Rodriguez stayed in the Polka Dots that designate him as the current leader of the King of the Mountains competition. Roman Bardet continues his reign as the White Jersey wearer, as the best young rider under the age of 25 in the race.

The question on everyone’s lips at the moment is whether or not anyone can catch Nibali. The Italian is unquestionably in charge of the race at the moment, and looks poised to ride all the way to Paris in Yellow. But this Tour has been an unpredictable one, with many crashes and strange outcomes. While Nibali is the clear favorite to win the race, anything can happen int he mountains, and there are still 10 stages left to be ridden. Vincenzo is a great climber of course, but it only takes one poor performance for him to give up time, and open the door for someone to challenge him. At this point, it unclear who can rise to that challenge, but perhaps someone will attack in the mountains to at least put some pressure on Nibali. We’ll find out in a few days.

American rider Andrew Talansky had a rough day of riding today. Heading into the Tour, he was considered to be amongst the contenders after he won the Critérium du Dauphiné a few weeks back. But severe back pain made it very uncomfortable for him to ride today, forcing him to the side of the road at one point. He took a four-minute break at that point, and it appeared that he would withdraw from the race, but he got back on his bike and rode on to the finish. Talansky finished more than 37 minutes behind the leaders of the stage, but did mange to avoid being eliminated, just beating the time cut off. Whether or not he can continue tomorrow remains to be seen.

Thursday’s Stage 12 will be much like today’s ride. It will cover 185.5 km (115.2 miles) between Bourg-en-Bresse and Saint-Étienne. It will feature a pair of Category 3 and 4 climbs, which will test the legs of the riders once again, but a downhill finish will make things fast and furious once more. It is another stage for a potential breakaway, and look for Cannondale to try to get Sagan off to the finish line again.

After that, things will start to get more interesting, as Friday brings the first true mountain stages, including a Beyond Category climb to the finish. The Alps loom on the horizon as we head into the weekend.