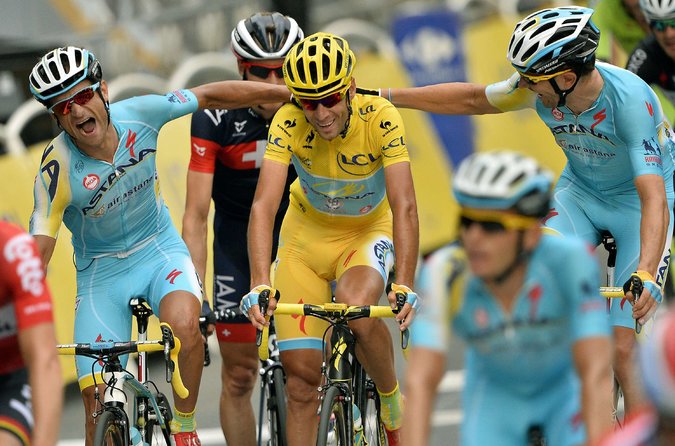 Yesterday was the final stage of the Tour de France, and as expected, Italian rider Vincenzo Nibali finished the race in the coveted Maillot Jaune, making him the champion for 2014. It was a dominating win for Nibali, who finished more than seven and a half minutes ahead of his nearest rival. All told, he wore the Yellow Jersey for all but two days of the Tour, and even put in a great performance in the individual time trial on Saturday, even though he already had the race won. As is usual on the final day of Le Tour, no riders attacked the race leader, and Nibali was able to ride into Paris to receive the adulation he deserved for such a dominating performance.

Of course, the final Sunday of the Tour de France isn’t just about the ceremonial ride into Paris. The sprinters lined up for one last mad-dash on the Champs Élysées, with Marcel Kittel nipping Alexander Kristoff at the line. As usual, it was a crazy day on the cobbles of the streets of Paris, with plenty of fireworks as the riders pushed towards the finish line. But Kittel is now amongst the elite sprinters in the sport, and he proved that once again.

Saturday’s individual time trial was also intriguing to watch. While Nibali put in a good performance, climbing fourth on the day, the rest of the Peloton was simply no match for world champion Tony Martin, who averaged 48.8 kph (30.3 mph) over the length of the 54 km (33.5 mile) route. His time was by far the fastest of the day, and proved why he remains the best time trialist in the sport at the moment.

Yesterday was a historic day in Paris, with two Frenchmen joining Nibali on the podium. Second place went to Jean-Christophe Péraud, who rode well on Saturday to take over the position from third place finisher, Thibaut Pinot. But Péraud nearly lost that second place finish when he was involved in a crash on the Champs Élysées on Sunday. Fortunately, it occurred far enough from the finish line that he was able to get back into the main group in time. Out of respect for his positioning, the peloton also slowed down to allow him to rejoin.

As for Pinot, he saw his position fall from second to third on Saturday, but he has a lot to be proud of. He went home in the White Jersey as the Tour’s best young rider, and it appears that he has quite a career ahead of him. At the age of 24, he is already show ing flashes of brilliance, and may be France’s best hope for an overall winner in the year’s ahead.

Cannondale’s Peter Sagan went home with the Green Jersey as this year’s top sprinter. It is the third year in a row that he has earned that honor, and it may be some time before anyone challenges him in that category. Meanwhile, Rafal Majka held on to the Polk Dot Jersey, becoming the first Polish rider to be named the King of the Mountains.

All in all, it was another good year for the Tour de France, although that was mainly due to some amazing efforts on individual stages. With Chris Froome and Alberto Contador crashing out of the race early, Nibali was simply too powerful for anyone else to challenge. He was so good, that I’m not sure that either Froome or Contador could have beaten him either, but it sure would have been fun to watch them try. Hopefully next year we’ll get some real competition for the Yellow Jersey, as the battle for the Maillot Jaune lacked any real sense of drama in 2014.

Still, Nibali earned the win and now has victories in all three of cycling’s Grand Tours. Only five other men in the history of the sport can make that claim. Congratulations to him, and the entire Astana team, for such an impressive show out on the roads of France.

We’ll see you next year Vincenzo.