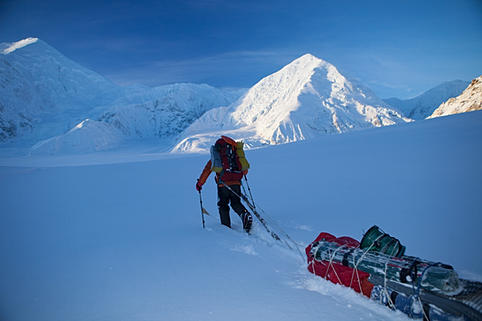 This past weekend officially marked the first day of winter here in the northern hemisphere, which means it is time for the winter climbing teams to start their expeditions as well. While some are waiting until after the holidays to get underway, others are already making their way to the mountains, where they’ll now face the daunting task of climbing some of the world’s toughest peaks during the coldest, most treacherous time of year.

There will be no fewer than than three teams heading to Nanga Parbat this winter, and according to ExWeb the Russian squad of Nickolay Totmjanin, Valery Shamalo, Serguey Kondrashkin and Victor Koval left for Pakistan yesterday. They hope to be on the trail to Base Camp as early as tomorrow, with plans for reaching the mountain as quickly as possible. They intend to climb a variation of the Schell Route on the Rupal Face, establishing Camps 1-3, with an intermediate camp consisting of one small tent stationed between C3 and the summit. They’ll start acclimating as soon as they arrive, and will then let the weather dictate their progress.

The Russians won’t be alone in Base Camp. Polish climber Tomek Mackiewicz is already there after acclimatizing in the Rupal Valley. He’s sharing space with Elisabeth Revol and Daniele Nardi, although they won’t be climbing together. Mankiewicz is attempting a solo summit of Nanga Parbat, while Revol and Nardi will try a new route.

Also heading to Nanga Parbat soon will be the Iranian team of Reza Bahadorani, Iraj Maani and Mahmoud Hashemi. The trio of climbers remain at home in Iran at that moment, where they are currently putting the final touches on their planning and logistics. They plan to depart for Pakistan during the second week of January.

After sorting out the issues with their climbing permit on K2, Denis Urubko and his team, which consists of Adam Bielecki and Alex Txikon, will now depart for China in the first week of January. Denis posted to his Facebook page that they will have 40 days to climb once they reach Base Camp. He feels confident that they are a strong enough team to accomplish the first ascent of K2 in the winter. They will be climbing along a new route on the North Face of the mountain, where they hope to get some protection and respite from the dangerous winds.

Finally, we head to Alaska for an update on Lonnie Dupre’s efforts to climb Denali in January. He was flown out to the mountain last Thursday, and has skied into his first campsite, which he’s using as a base of operations until the expedition officially gets underway on January 1. In the meantime, he has started to shuttle gear up to Camp 1, located at 7800 ft (2377 meters) as also acclimatizes to the cold and altitude. He has a lot of work to do for his solo expedition, but with more than a week to go until the arrival of the new year, Lonnie is in good shape so far. He even reports that a raven has joined him on his expedition, and has followed him on his journey over the past few days.

For more on Lonnie’s efforts, check out the video below.