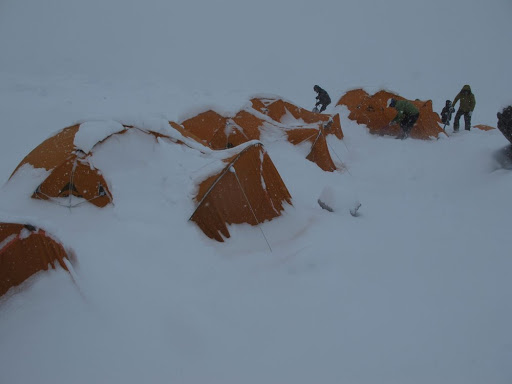 The start of the 2015 climbing season continues to unfold as expected. Teams are continuing to arrive in Everest Base Camp on the South Side, where they are being greeted by unusually heavy snow that is delaying the start of their acclimatization rotations. Meanwhile, the first climbers are now en route to BC on the North Side as well, as some other notable mountaineers arrive in Kathmandu.

Will start with news from the North Side today. While climbers from the Nepali side of the mountain have been slowly making their way out to Base Camp over the past week or so, those heading north generally have to wait for the Chinese to open the border into Tibet. That has now happened, and the teams who will be climbing from that side of the mountain have begun to cross over and are now making their way to BC as well. Unlike on the South Side however, they can actually drive to the start of their climb, so they generally take a few days to get there by stopping the towns of Nyalam and Tingri for acclimatization purposes.

But North Side Base Camp is quickly becoming a hive of activity, as Sherpas from the major teams have arrived onsite and are quickly getting the camp prepared for the arrival of the climbers. According to reports, there will be roughly people attempting to summit from the Tibetan side this spring, with about 150 Sherpas joining them.

Among the notable expeditions hitting the North Side this spring is Kilian Jornet’s attempt at a speed record from that side of the mountain. The Spanish ultra-runner has not left for the Himalaya yet however, although that doesn’t seem unusual. We know that he’ll be we acclimatized before he arrives in the Himalaya, and will most likely want a late summit attempt anyway so that he can avoid bottlenecks and traffic jams near the summit.

Also heading north is Raphael Slawinski, and his climbing partners David Goettler and Daniel Bartsch. They’ll be attempting a new route along the Northeast Ridge this spring, and if successful it’ll be the first new route opened on Everest in more than a decade. The trio will make the attempt in alpine style, without oxygen, fixed ropes, or Sherpa support. The team is on its way to BC now, but prior to their departure National Geographic conducted an interview with Slawinski about their expedition. In it, he shares thoughts on his motivation for this climb, details on the route itself, their projected schedule, and much more.

Young climber Matt Moniz is on his way to Kathmandu as I write this. He’ll be attempting a double summit of Everest and Lhotse from the South Side, and the first full ski descent of Lhotse as well. He’s climbing with Willie Benegas, and should arrive in Nepal tomorrow where he’ll catch his breath briefly before heading out to Base Camp.

ExWeb is reporting that route fixing has begun on both side of the mountain with teams of Sherpas installing ropes that will eventually be used by the commercial climbing teams. According to reports, the rope fixing team on the South Side have passed through the Khumbu Icefall and have gone up all the way to Camp 2. That means that once the weather clears, the climbers can start their acclimatization rotations on schedule. That should happen in another day or two. Meanwhile, on the North Side, the ropes have been placed all the way to the North Col, setting the stage for the climbers on that side of the mountain too.

Finally, Alan Arnette has checked in from South Side EBC where he is told that the new route through the Icefall is safer and shorter than it has been in the past. He also says that there is a fast new Internet service in Base Camp that will help facilitate better communication, although it comes at a cost of $40 for 1GB of data.

Alan also says that helicopters are a common site in BC this year, despite the fact they were suppose to be banned. He counted 10 flights just in the time that he wrote his most recent blog post. In other words, the Nepali government continues to promise things, but not deliver. Hopefully some of their pledges will become reality.

That’s all for now. More to come soon.