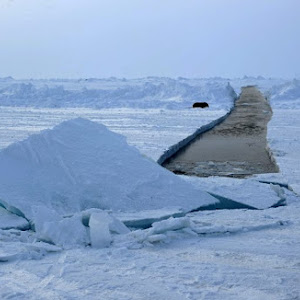 Yesterday I posted an update on the Race Against Time team, which is made up of three British explorers who intend to ski from the North Pole to the Canadian coastline at Ward Hunt Island. The news was that they had arrived in Svalbard in Norway, but their travel on to the North Pole was delayed. Today we have a better understanding of why their flight out to the Barneo Ice Station hasn’t taken place. It turns out, the temporary runway built there each spring has cracked under the pressure of the first arriving flight, delaying anymore inbound aircraft.

For those not familiar with Barneo, it is a temporary base that is constructed in the Arctic Ocean each year by a team of Russian engineers. They first locate a large ice flow that can support the camp, and a construction crew parachutes onto that location to begin building a runway and setting up the basic structures. Later, larger aircraft arrive bringing more supplies, tents, and other equipment.
That same process was underway this season, with the Barneo camp coming together mostly on schedule. But according to ExWeb the arrival of the first AN-74 aircraft – a large and heavy Russian plane – cracked the landing strip, delaying the arrival of any more aircraft and leaving teams of skiers, explorers, and researchers stranded in Norway awaiting transfer to the base.
Fortunately, repairs are already underway, and the weather is lending a hand. Temperatures at Barneo are said to be in the -25ºF/-32ºC range, and crews there are pouring water into the cracks on the runway to help repair it. Reportedly, the team has also adjusted the direction of the airport slightly to help compensate for any potential issues.
If all goes according to plan, the repairs should be complete today, and flights will resume as early as tonight. The Race Against Time team should be on the next flight, and will hopefully be shuttled on to the North Pole shortly there after.
The 2016 North Pole season will not be a very busy one, but it should still be interesting. Stay tuned for update once it actually gets underway.