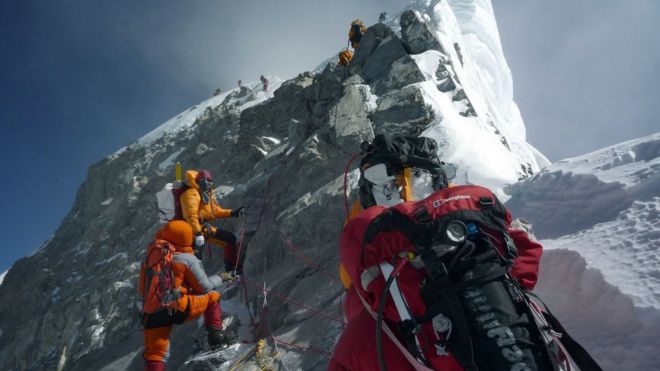 The current – and probably final – weather window on Everest continues today with more teams heading to the summit. At this point, the number of climbers on the mountain is starting to dwindle, but there are some key players still making their way up the mountain. The season isn’t quite over yet, and now looks to stretch into next week for at least one climber, but the end is now in sight as the last teams make their way up and down the mountain.

Amongst the teams currently on their push are Alpelnglow, who are accompanied by Adrian Ballinger and Cory Richards with the hope of Ballinger getting his no O’s summit of Everest. The team is steadily making their way upward and should be in position to summit tomorrow provided everything goes well. Adrian reports a bit of gastrointestinal distress on the climb today, but seems to have sorted things out. The team is in good spirits and doing well.
Also eyeing a summit for tomorrow or Sunday are the Alpine Ascents team who are now on their way up, and report good weather and no major crowds. Himex is also on the move and eyeing the same window as they close out the season too, as is SummitClimb, who were turned back by poor weather on their first attempt but have now regained their strength and are heading up to give it a go one more time.
Other notable climbers currently on the move include Ralf Dujmovits who is attempting a summit without bottled oxygen, something that has been on his “to do” list for several years now. He reports exceptional weather on the North Side for the days to come, and looks to summit this weekend as well.
Also on the North Side, Alan Arnette is reporting that there are rumors that Kilian Jornet may have set off on a second attempt at the speed record on Everest. Those rumors are unconfirmed at this point, but after making a 26-hour ascent a few days back, then returning to ABC, Jornet said that he thought he could improve on his time, especially since he had stomach issues on the way up as well. For now, we’ll have to sit tight and see if he is indeed heading for a rare second summit, and of course we’ll post and update as we learn more.
On the South Side, Japanese climber Nobukazu Kuriki is having an on-again, off-again relationship with the mountain. After setting out for the West Ridge with plans to summit along the tough Hornbein Couloir, it was reported that he got sick and decided to descend. But, arriving back in Gorak Shep, he started to feel much better and now says that he plans to go back up the mountain. He hopes to summit early next week, standing on top by the end of May.
Finally, we have a quick update from The Himalayan Times on Janusz Adamski, the Polish climber who summited Everest from the North Side, but then illegally traversed into Nepal and descended along the South Side. Reportedly, he is currently in Namche Bazaar and tells The Times that he is “ready to face any legal challenge in Nepal to safeguard the greatest achievement of my life.”
He, and another climber by the name of Andrzej Ziółkowski who helped coordinate the project, will descend to Lukla today, then take a bus to Kathmandu where they will face potential charges from the Department of Tourism. Chances are, Adamski will see a 10 year ban of climbing in Nepal, but we’ll have to wait to learn the final verdict.
That’s it for now as we head into the weekend. The news is trickling off at this point, but still a few more days of action to come.