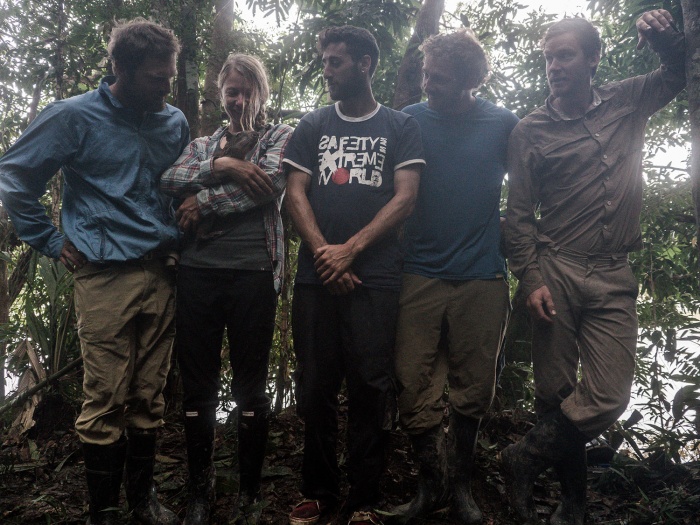 At the end of March a team of professional kayakers, led by Ben Stookesberry, set off to make the first descent of the Apaporis River in Colombia. The 700-mile long waterway is remote, wild, and largely unexplored, which is of course the allure of an expedition kayak team. But, 19 days into their journey, the team encountered a challenge they did not expect, a run-in with the rebel forces known as FARC, who eventually took them hostage.

The descent of the Apaporis started as expected, and once the team was out on the water the soon found themselves complete alone. The paddlers consisted of Stookesberry, as well as Chris Korbulic, Jessie Rice, Jules Domine, and a fifth paddler who wishes to remain anonymous. For several days they didn’t see another soul, with just the wild Colombian landscape surrounding them. But as time went by, they began to encounter the occasional village, including FARC settlements. At one point each member of the team was approached individually, with rebel forces questioning them and inspecting their gear. At that point, the FARC soldiers were even described as being “polite.” But, eventually something changed, and the rebels came in the night to grab the foreign interlopers.

What followed was five days of detainment, that could have turned into a disaster due to a potential rescue attempt by Colombian forces. Fortunately, no one was seriously hurt and the kayakers were eventually freed and allowed to go on their way, although they were forced to leave important tech gear behind. The entire tale has been recounted in a story published earlier this week on Gear Junkie, and it is definitely worth a read if you haven’t heard it yet. It is a good reminder that not all of the challenges we face on our adventures are of the natural variety, and there are many parts of the world where outsiders are still not welcome.

It is also important to note that Colombia has made impressive gains over the past few years, and is now a much safer place to travel than it once was. Indeed, the Apaporis River was seen as a place that was largely open to travelers, which is why the team chose it to begin with. A 2016 peace agreement between the government and FARC forces gave the rebels their own political party and ended a conflict that had lasted 52 years. But, apparently there are still some trust issues to overcome and fences to mend along the way.

Thankfully, Stookeberry and the team are safely home now. But, he is already thinking about the Apaporis and going back to complete the descent. Obviously his encounter with FARC hasn’t dissuaded another visit to Colombia.