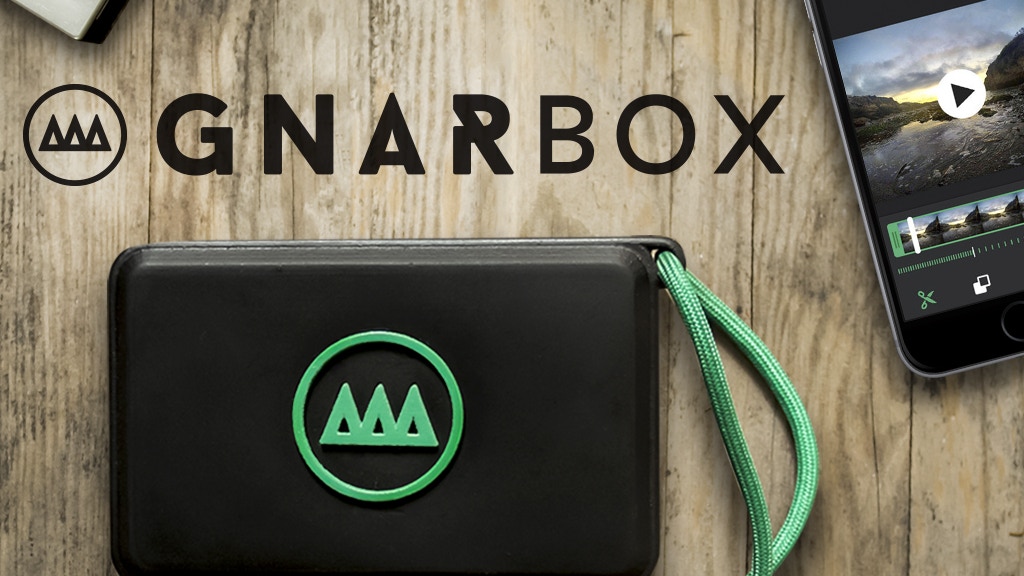 One of the biggest challenges of being a travel writer in the modern age is keeping all of your photos and video backed up while on the go. It only takes one memory card to fail or get lost to spoil your entire trip, leaving you scrambling for resources. Of course, you can carry a laptop along, and dutifully back up your files on a regular basis, but laptops are fragile and add weight to your pack, particularly when you’re heading out into remote areas. But a new product called the Gnarbox looks to solve these problems, while giving users a mobile editing station that they can access wirelessly too.

With its rugged case, the Gnarbox was built to handle travel in the outdoors. The device is shock and dustproof, while offering solid resistance to water too. That means you can toss it around, drop it, and even get it a little wet, without fear of it breaking down. I wouldn’t recommend it get fully immersed in water, but you can take it with you without fear of damage under even some extreme circumstances.

The box itself is a little over 5 inches (12.7 cm) in length and 3.4 inches (8.6 cm) in width. At first glance, it actually appears to be rather nondescript, with few indications of what it is actually used for. But, along one side you’ll soon notice a pair of doors that clicks open and closed. Behind those doors you’ll find not only two USB 3.0 ports, but an SD card reader and a Micro-SD slot. Those ports can be used to read photos and videos stored on cameras, which can then be backed up to the Gnarbox’s 128GB of internal storage. A MicroUSB 3.0 port is also included for charging the Gnarbox.

Under the hood, the Gnarbox is powered by an Intel quad-core 1.92 gHz processor that is paired with a discreet HD graphics GPU too. For all intents and purposes, this makes it a tiny computer, specifically designed for use by photographers and videographers working in the field. Those chips give the device enough power to not only quickly and easily edit photos on the fly (including .jpg, .png, and RAW), but also handle editing duties on video up to 4k resolutions at at much as 240fps.

So how does the Gnarbox work? For starters, you need to install the custom Gnarbox app on your iOS or Android device. That app serves as the interface for interacting with the Gnarbox, allowing users to back-up their photos and video, which is pulled from the SD or Micro SD cards, or the cameras themselves via the USB ports. Once the files are saved onto the Gnarbox, the app allows the user to edit the images and videos, all without the need of laptop.

The smartphone or tablet used to edit the photos and video connects to the Gnarbox using a built-in WiFi router. The entire process is quick and simple, and with the latest update to the software, the Gnarbox can even receive large firmware updates that improve its functionality and efficiency. In fact, the first time I connected my iPad to my Gnarbox, it first had to download a large software update for the onboard operating system.

The Gnarbox app gives users the ability to crop their images, adjust color, and more. Videographers can edit their videos just as if they were back in the studio, cutting out the things they don’t need, while keeping the best footage. That footage can then be reassembled into a finished clip that can in turn be uploaded to YouTube, Facebook, or Vimeo. The entire process is easy to pick-up, works surprisingly well, and is a fantastic tool for use on the go.

A 4000 mAh rechargeable battery powers the Gnarbox, allowing it to function even while traveling off the grid. That’s enough to run it for 4-6 hours, depending on how heavy a workout you put on it. I found that when editing photos, I was more likely to hit the higher end of that estimate, while 4k video will cause it to run closer to the 4 hour mark. Either way, if you’re going to be in the field for awhile, you’ll want a way to keep the device fully charged, so bring a solar panel and/or another USB battery pack along with you.

Typically when I travel these days, I carry a “real” camera – either a DSLR or mirrorless – and my iPhone for quick images. The SD cards used my cameras fit nicely into the Gnarbox, and can be backed up quickly and easily. The device will also back up the photos stored on my iPhone, but to do so I actually have to plug it into the USB port. I would love to have the option to just back-up via WiFi instead, even if it meant taking a hit on battery life. I’m hoping this is something that can be implemented in the future, but for  now, we’ll just have to plug our smartphones into the Gnarbox instead.

Speaking of the future, I’m told the company is planning on releasing an updated model with twice the storage capacity (256 GB), and they team has a roadmap for features they want to add in future versions of the app too. Those include adding new options for editing, activating an auto-import feature, the ability to manage multiple projects, and more. Some of those features are ones that I’m really looking forward to, and its nice to see the device will be getting plenty of future support.

The Gnarbox is priced at $299 and is a fantastic addition to any photographer or videographer’s bag. It is a full-featured and powerful editing station that you can take with you anywhere, allowing you to travel lighter and faster, without fear of damaging your expensive laptop. For now, it is only available at gnarbox.com, which is where you’ll also find more information about the product.