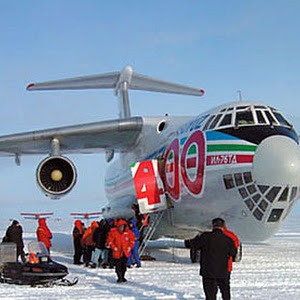 November is here at last, and while the fall climbing season in the Himalaya is still chugging along, an entirely different group of explorers is preparing to set out for the Antarctic. As of this writing, most are still in the preparation phase, organizing gear, and making last minute travel plans to fly to Punta Arenas, Chile where they’ll then hop on a flight operated by ALE – Antarctic Logistics and Expeditions – to begin the real journey. Throughout November, December, and January, this ambitious men and women will be making their way to the South Pole, up Mount Vinson, or attempting some other wild expedition across the frozen continent. And of course, we’ll be following their progress as closely as possible.

According to ALE’s flight schedule, the first aircraft to head to Antarctica is scheduled to take off tomorrow, November 3. That plane is suppose to be shuttling staff and supplies to the company’s Union Glacier camp, which is often used as the drop-off point for explorers, researchers, and mountaineers. From there, most of them will catch yet one more flight to their actual starting point, which can very depending on their objectives.

While most of the expedition skiers are still en route or just getting their plans together, one explorer is already in Punta Arenas and preparing to set out as early as tomorrow. British adventurer Ben Saunders has been in Chile for more than a week now, and has been finishing up his last minute preparations. He is scheduled to fly out on ALE’s first aircraft and could reach Union Glacier as early as tomorrow. If so, that could prove to be an important head start for the journey he is about to embark upon.

As you may recall, Saunders is attempting to become the first person to ski solo and unassisted across Antarctica. That is a journey that will take the better part of the entire expedition season, so getting started as early as possible is highly beneficial. This is especially true when you look at the track record for ALE flights over the past few years. It has not been uncommon for storms to prevent those flights from taking place, sometimes delaying the start of an expedition by as much as two weeks. That can completely throw off any plans that the skier may have made, and force them to readjust their schedule dramatically.

For now though, that first flight is still on track for tomorrow, and if all goes as planed, we’ll have our first adventurer embarking on a very long journey soon. We’ll of course be following closely, and posting regular updates as the season unfolds. It should be an interesting one.