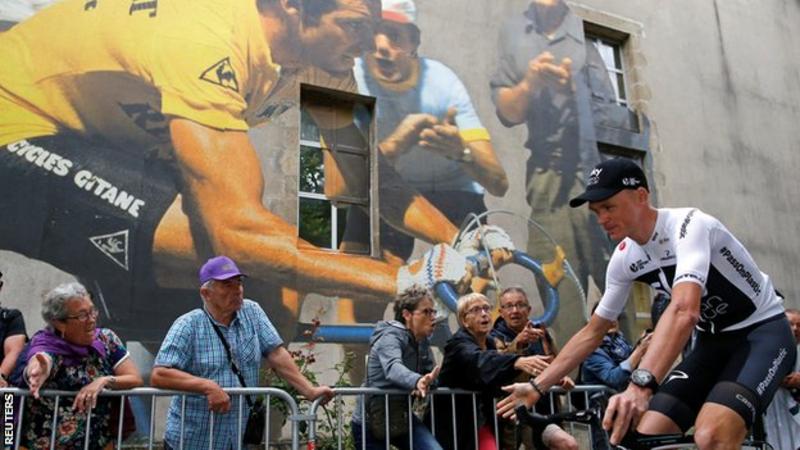 One of my favorite sporting events of the year gets underway tomorrow when the 2018 Tour de France kicks off three weeks of cycling that promises to be one of the most exciting and grueling races in years. And while defending champ Chris Froome looks to be the clear favorite, this year’s Tour is anything but a foregone conclusion for the Sky rider.

The first stage of the race will cover 201 km (124 miles) of flat ground between Noirmoutier-en-I’lle and Fontenay-le-Comte. This will certainly be a day for the sprinters, giving the peloton a chance to warm up their legs, start to get a rhythm and then get out of the way near the finish line so guys like Mark Cavendish and Marcel Kittle can do their thing. This opening stage isn’t likely to have much in the way of fireworks until the very end, although it should still be pleasant to watch as the riders make their way along the course.

The top sprinters had better enjoy every flat day that they can, because this is not a Tour made for them. Sure, they’ll get their chances to strut their stuff and rack up points in the Green Jersey competition, but this year’s course was designed to test Froome and the other General Classification contenders in every way imaginable. That means mountain stages, and lots of them. And these stages are going to be amongst the most difficult the Tour has ever seen, including grueling days in the saddle with multiple mountain summits to conquer along the way.

The first really interesting stage will come Monday when the team time trial returns for the first time in a few years. Don’t be surprised if the dominant Team Sky doesn’t grab the Yellow Jersey immediately after this stage, possibly holding on to it for the remainder of the race. Their are few other teams that can hang with Sky in terms of overall power, as other squads like BMC and Sunweb will look to limit their losses. If a GC contender wants to be within striking distance of Froome, they can’t give up too many seconds early on.

From there, we’ll have several more flat, sprint-focused stages with the next really interesting day coming on Stage 9 when the riders will face 21 km (13 miles) of cobbles. The cobblestone roads always cause havoc in the peloton and if it happens to rain that day too, things could really be a mess. Hopefully the GC contenders will make it through unscathed, but it is almost a given that some riders will be out of the race following this brutal day.

The real challenges will come in the Alps and Pyrenees of course and the Tour won’t disappoint in that area. Week two takes the riders up some of the biggest and most iconic mountains the race has seen, including back-to-back-to-back mountain stages on Stage 11, 12, 13. The 12th stage in particular should be tough, with three beyond category alpine climbs to get over, including a tough finish at the top of Alpe D’Huez, quite possibly the most iconic mountain stage in all of cycling.

From there, the riders will get a bit of a breather before heading into the Pyrenees in week 3. The Queen’s Stage of the race will no doubt be Stage 19, which again features multiple massive climbs. Six in fact, including the dreaded Tourmalet, which is tough enough to crack just about any rider, especially nearly three weeks in.

As if that wasn’t enough, Stage 20 is an individual time trial, which comes just one day before the ride into Paris where the 2018 winner of the race will be crowned. Froome is a great TT rider, so if anyone wants to beat him, they’ll likely need to have a sizable lead heading into that penultimate day.

This year’s course was specifically chosen to give Froome a test. He now has four Tour wins under his belt and would like nothing more than to ascend to the ranks of the men who have five wins. That group includes Jacques Anquetil, Eddy Merckx, Bernard Hinault, Miguel Indurain. Remember, Lance Armstrong actually won seven, but they have been officially stripped away, making five wins the mark by which all other riders are judged.

Personally, I believe the race is still Froome’s to lose, although there are some interesting factors to consider going into the race. Besides having a course designed specifically to test him, the Sky rider is also coming off a tough spring during which he also won the Giro d’Italia. He hasn’t competed on such a high level prior to riding in the Tour before and all of those miles could have taken a toll on his legs. A long, and protracted battle against doping charges has certainly weighted on his mind too, and could have worn him thin as well.  That leaves him potentially more vulnerable than in the past. Whether or not that is enough to allow someone else to sneak in and claim the maillot jaune remains to be seen.

If someone else were to win this year’s race, it will likely come from a list of well-known contenders. BMC’s Richie Porte is riding well this year and could have the form to hang with Froome. Similarly, Movistar’s Nairo Quintana is also looking particularly strong, having skipped the Giro to focus solely on riding in Le Tour. Former winner Vincenzo Nibali also says that he is laser-focused on the Tour this year as well, although his form has not looked great. Perhaps he’s been playing possum and is now ready to ride, but that seems somewhat unlikely. Other potential challengers to the crown could include Tom Dumoulin – who looked good at the Giro – and Adam Yates, one of the best young riders in the peloton too.

Of course, all of this will be decided on the roads of France over the next three weeks. As usual, I’ll post occasional updates on the proceedings as big news breaks or important stages cause changes to the GC standings. For cycling fans, the next few weeks will be a bit like Christmas, and I for one am ready to get the race started.