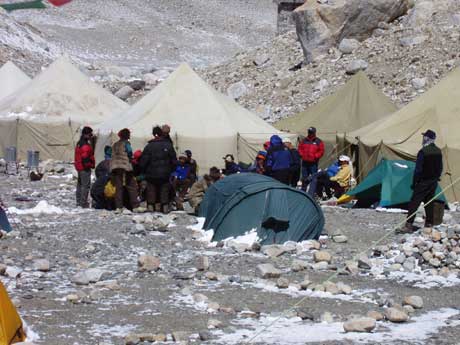 We’ve been hearing regular updates from Everest’s South Side the past few weeks, with teams reporting in as they make their way to BC. But so far we have had little word from the North Side, where the Chinese Torch Team are the soul residents in BC and the entire mountain for that matter. Today however, Everest News has posted an update giving us a glimpse into how things are progressing.

According to the post, the Torch Team arrived in BC on March 15th and began setting up camp. On March 31st, cell phone service for the North Side was established, allowing for communication on the mountain and back to the rest of the World. On the 2nd of April, the climbers began moving to Advanced Base Camp, and the route to the North Col has been cleared with fixed ropes set down.

The report also says that the team of climbers number more than 50, with hundreds of porters. Clearly the Chinese are taking no chances and sparing no expense in their bid to make a successful summit with the Torch. If they continue at the pace they are reportedly on, they’ll have fixed ropes to the summit in no time at all. According to Everest News, the Chinese plan to make three summit bids, the first of which is due on the 28th of April. If they stay on schedule, this will be one of the earliest summits ever, and would put them well ahead of the May 10th target date that has been discussed on so many occasions.

Obviously to speculate on dates this far in advance is difficult. But should the Chinese actually make a successful bid in late April, perhaps it would open things up on the South Side as well. Communications with BC may return to normalcy, and teams could begin to climb above C2. Of course, for all that to happen, the Torch needs to reach the summit, and as big of a spectacle as that will be, I’m sure the whole world will know when the Chinese have topped out.