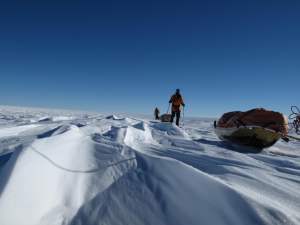 It was another busy weekend at the bottom of the world, with Antarctic teams continuing on their way, despite a variety of challenging and difficult conditions.

Eric Larsen, along with Bill Hanlon and Dongsheng Liu, have passed the halfway point of their journey to the Pole, and were able to catch a resupply at their second cache on Sunday. The treasures found within led to an afternoon of bartering, in which each man traded out their unwanted goodies for something they were craving from someone else’s pack. Today is a rest day for the crew, who will rest their tired bodies and stay snug in their tents. Just 290 nautical miles to go until they reach 0ºS.

Meanwhile, the Kaspersky Commonwealth Team, which consists of seven women from around the globe, seem to have had a good weekend of travel, making good time amidst high spirits. Their latest dispatch does say that they are in the “middle of nowhere” however, with nothing but a big, wide-open, white expanse around them in all directions. They do report that the grind is starting to wear on them however, with the sleds remaining quite heavy following their recent resupply, and the current route is a steady, up hill trudge. The weather has also gotten colder as they’ve moved away from the coast, and each of them is bracing for difficult conditions ahead.

Speaking of difficult conditions, Ryan Waters and Cecilie Skog reported in on Saturday, with the word that they are dealing with major sustrugi, which are presently giving them fits. For those that don’t know, suastrugi are ripples, or waves, created in the snow from the high winds pushing the white stuff around. When they harden, the make for challenging mounds, some only an inch or two in height, to others “a big as a car” as Ryan and Cecille describe them. The larger ones are best to ski around, as you’ll just expend too much energy going over them, but the smaller and medium sized ones are tough to avoid, forcing explorers to just deal with them. The result, is a very long day on the ice, which makes dragging your pulka all that much more difficult.

Finally, Meagan McGrath weighed in on Saturday as well with little to report, although she did manage to cover 14+ nautical miles, which is a respectable distance considering her recent accident and return to the ice. She’s still having issues with charging her devices, and there has been no update over the weekend, so hopefully she’s simply conserving power while she works out the logistics.