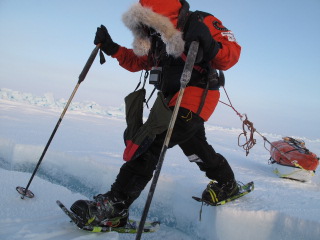 It has been another busy week in the Arctic, where polar explorers continue to have very tough going, facing large, and very daunting, icefields and big leads, which are areas of open water that must be navigated around or swam across so that the teams can continue to make progress. As is typical for the early start of the season, it is very challenging, but things actually get easier, and mileage picks up as they get further north.

One team this is definitely having a rough go this week is Eric Larsen’s Save The Poles Expedition. Eric is joined out on the ice by Antony Jinman and Darcy St Laurent, and according to their most recent updates, this has been a very long and tiring week. Antony has been struggling with an injured knee, which isn’t quite back up to par just yet. They’ve had to deal with all the usual stuff that I mentioned above, plus inclement weather. At one point it was so cold, they had to huddle behind ice blocks to stay warm. They have had to remind themselves on more than one occasion why they are out there, and they end their last dispatch with the very ominous line of “We are tired.”

Amelia Russell and Dan Darley were reminded today about how fast and unstable conditions can be out on the arctic ice. At one point they came across two ice sheets crashing against one another, with one sliding across the other at a speed of a foot a minute. Later, Amelia fell through the ice up to her knees, so her gear needed to be dried out. In the conditions they are traveling, wet gear stays wet, and frozen, for some time. The two Brits covered six miles today, but also report that they were battling negative drift throughout, with at least three occasions were they were well aware that the ice was moving them backwards. Very frustrating and difficult to be sure.

Christina Franco sounded very cheery on her latest audio dispatches, but her voice didn’t match how long and challenging her day was. She started things off with a rather tough icefield, which gave way to what she describes as a “gigantic lead” which caused her to go an hour and a half out of her way in order to continue moving north. Eventually she did find a way around, which made it all work out in the end. She said that the cold winds continue to persist, forcing her to don extra gear to stay warm, but on a positive note, the days are getting noticeably longer, which is making it easier to get up and moving in the mornings without the need of a headlamp in the tent. Right now the explorers are experiencing roughly 12 hours of sun per day.

Australian Tom Smitheringale continues his solo and unsupported journey north as well. He’s now been out on the ice for more than 18 days, and while progress has been, at times, quite slow, he remains in good spirits, and is happy to be where he is, despite the incredibly difficult conditions. Temperatures have been hovering around the -30ºF mark for the past few days, and with cloud cover setting in, there hasn’t even been much sunshine to help brighten the day. Still, it’s all about moving forward as best you can, and it seems Tom is doing well in that department, calling on his past experiences and knowledge to get him through the challenges of the early part of the expedition.

Finally, the Catlin Arctic Survey Teams are both off and running. The Explorer Team hit the ice on Sunday and have been making their way north ever since, collecting ice samples and other data as they go. Meanwhile, the Ice Base Team, which consists of a group of scientists, was dropped at their location as well, and they’ll now begin collecting data too. The scientists who will be spending the next several weeks conducting research on the impact of climate change on the arctic include Helen Findlay (Plymouth Marine Laboratory); Ceri Lewis (University of Exeter); Laura Edwards (Bangor University) and Glenn Cooper (Institute of Ocean Sciences, Fisheries and Oceans Canada). These lucky four will have all the joys of living in the Arctic, including the -40º temperatures, without the joy of actually going somewhere. It’s going to be a very long season for them.