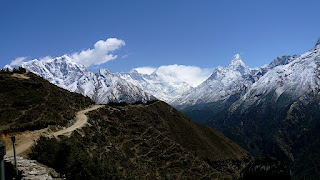 Over the weekend, the big commercial climbing teams continued their progress towards Everest Base Camp, with most of them now on the trek in the Khumbu Valley. As I’ve mentioned before, the trek is a beautiful one, and is necessary to reach Base Camp on the South Side. It is also part of the early acclimatization process that prepares the climbers for higher altitudes later on. The North Side is a completely different story, as teams are able to drive to BC there, which makes their acclimatization schedule a bit different.

Everest Guide Dave Hahn and his two clients, father-daughter Bill and Sara McGahan, are the furthest up the Khumbu Valley of any of the teams, and it appears that they will be the first to reach Base Camp. Dave is sending dispatches back to the National Geographic Adventure blog, and he reports that not only have they reached Pheriche, a popular rest-stop on the trek, but Bill and Sara are doing remarkably well. The altitude hasn’t bothered them in the least so far, and as a result they took a “rest day” trek today, going up as much as 2500 feet, to catch some spectacular views of Lhotse, Cho Oyu, Makalu, Ama Dablam, and others. If all goes as planned, Dave and his companions will arrive at BC on Thursday.
Similarly, Alan Arnette, who is climbing with International Mountain Guides, continues to share his trekking experience in the Khumbu. His blog posts from over the weekend talk about shopping in Namche Bazaar’s famous Saturday Market, and taking an acclimatization trek that gave the team their first real view of Everest. Today, the team has moved on to Debouche, the next stop in the trek. Alan reports that everyone is moving well and feeling fine. The IMG itinerary says that they expect to arrive in Base Camp on Sunday.
Also on the trail, and the same relative schedule, are the Himex and Altitude Junkies teams. Both were in Namche over the weekend and both are progressing well. This year, the Himex squad took a different approach to getting to the Khumbu however, electing to take helicopters from Kathmandu to Lukla, rather than going the standard route of flying through the KTM airport. The helicopters allowed them to skip past the luggage check and long lines, and get delivered in style to the infamous Lukla airport. Of course, this option comes with and added expense, but Himex, led by the sometimes controversial Russell Brice, is well known for sparing no expense to keep their clients safe, happy, and comfortable.
Updates this week will no doubt be more about the trek. Looks like teams will be in BC starting at the end of the week, and then the real work will begin. Next week we should start to see the first hikes up to Camp 1, as the climb begins for real.