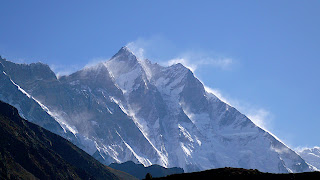 Remember Charlie Wittmack? He was the guy we were following since last summer when he set out on his World Tri, an expedition that included a swim across the English Channel, a bike-ride across Europe and Asia, and a climb to the summit of Everest. I wrote about his progress a few times along the way, but after he was struck by a car in Kazakhstan, and returned home for a bit, it was difficult to get updates on his progress. The last I had heard, he had returned to Nepal and was on his way to Everest, but dispatches were few and far between after that.

Now, more than a year after he set out on his World Tri, Charlie is getting mainstream coverage in the form of a major article on ESPN.com. The article they’ve posted there is quite extensive, and seamlessly meshes both video and text to tell Charlie’s story, and what a story it is. As you can imagine, it gets into far more detail than we were able to find before, and Charlie openly discusses his obsession with completing his epic “triathlon.” The story also talks about the severe ups and downs he suffered while on the road as well, missing his family, suffering injuries, and eventually going home for awhile due to severe health problems.

The story isn’t just about Charlie’s drive to complete his expedition. On the contrary, it’s also about love, family, and chasing your dreams, no matter where they take you. The journey was not an easy one for Charlie, or his wife Cate, but in the end, he came out a different person, with a changed perspective on what is important in life. It’s a great story and definitely worth the read.

It is always great to see the mainstream press pick up a story like this and ESPN does a good job of getting to the heart of it. Read the whole story by clicking here.