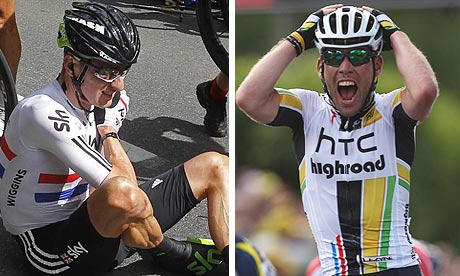 If you were looking for excitement and fireworks on the Tour de France, today was not the day to tune in. The 218km (135.44 mile) stage 7 was mostly flat and fast, which predictably made it a day for the sprinters to show off their talents, with a just as predictable winner.

It was Mark Cavendish of HTC – Highroad who claimed his 17th career stage win today by out sprinting Alessandro Petacchi andAndré Greipel to the line. Cavendish’s team mates shadowed him well all day long, and led him not only to the stage win, but a high placement in an intermediate sprint that earned him more points toward the coveted Green Jersey.

The weather was an improvement over yesterday, when rains soaked the course, but that didn’t make it any safer for the riders. There were once again a number of big crashes, resulting in a couple of more riders pulling out of the race. The two big names were to exit were Brit Bradley Wiggins, who was a podium contender for Sky Procycling and Belgian Tom Boonen of Quick Step. Boonen withdrew due to injuries suffered in a crash yesterday that made it too painful to continue today.

As far as the standings go, Team Garmin-Cervelo’s Thor Hushovd remained in Yellow for another day, although he is likely to drop that jersey tomorrow in the first real climbs of this year’s race. Who will pick it up remains to be seen however. Jose Rojas re-claimed the Green Jersey today and picked up a number of sprint points over Philippe Gilbert. Those two riders have been battling over the jersey thus far, but Cavendish is now hot on their trail and in third place in that competition. The Polka Dot Jersey is still with Johnny Hoogerland today, although the climbers will begin their fight in earnest tomorrow. Finally, the White Jersey for the Tour’s best young rider has passed over to Robert Gesink of Rabobank after Geraint Thomas got caught up in one of the crashes today.

As mentioned, tomorrow’s stage will finally mix in some real climbing, including a Category 2 near the finish and an uphill Cat 3 at the line. While it isn’t a big mountain stage, those are a week away yet, it will put some order to the Peloton and sort out the contenders. The question is, will Alberto Contador try to make up some time. You have to think he’ll try to earn some time back before hitting the Pyrenees.

The course tomorrow stretches for 189km (117.43 miles) between Aigurande and Super-Besse Sancy. I promise it’ll offer more drama and suspense than today’s leg.