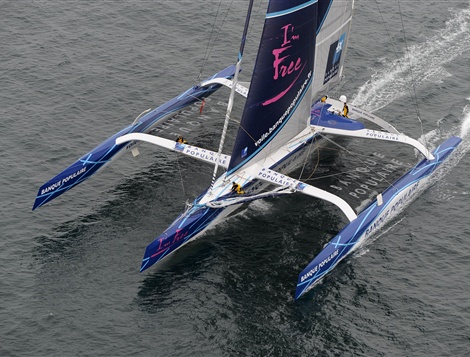 Last Friday, the Maxi Banque Populaire V sailing ship completed a circumnavigation of the globe and set a new speed record in the process. The ship, which featured a British captain and a mostly French crew, beat the previous speed record by nearly three days, and claimed the Jules Verne Trophy in the process.

The crew of 14, which was led by Captain Brian Thompson, managed to circle the globe in just 45 days, 13 hours, 42 minutes, and 53 seconds. (The previous record, was 48 days, 7 hours, 44 minutes, and 52 seconds.) They crossed the finish line in Brest, France at 10:14 PM Friday evening, bringing the 130-footmaxi-trimaran into port at last.

The ship managed to set a few other notable sailing records on its voyage as well, setting new marks for shortest times for reaching the equator, the Cape of Good Hope, and Cape Leeuwin in Australia. The record for fastest time equator-to-equator was also broken along the way as well.

The Jules Verne Trophy is awarded to the fastest circumnavigation of the world by any type of yacht and is named for the famous author who penned Around the World in Eighty Days. This new record is edging us ever closer to cutting Verne’s vision of a circumnavigation in half, and while the next team will have shave more than 5 days off this record to achieve that feat, it no longer seems unlikely that someone will eventually find a way to circle the globe in a sailing ship in under 40 days.

Congratulations to the crew of the Maxi Banque for a job well done, and thanks to Lou-Phi for giving me the heads up on the record, even as it was about to be broken. As always, it is much appreciated mate!