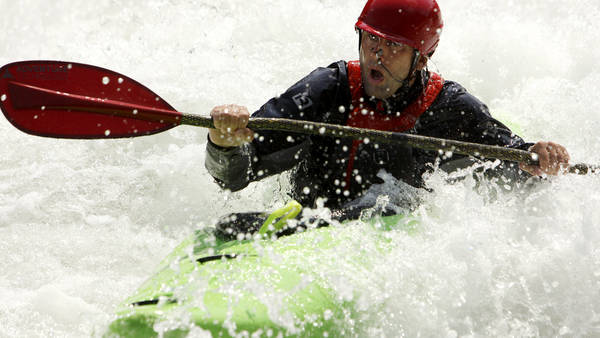 Looking to start your week off with a little dose of inspiration? Then look no further than this article on Erik Weihenmayer that was published by the New York Times last week. Most of us are aware that in 2001 Erik became the first blind person to summit Everest and since then he has continued to amaze with his various other adventures, which include climbing the rest of the Seven Summits, cycling from Hanoi to Ho Chi Minh in Vietnam and competing in adventure races, amongst numerous others. But now he is planning a challenge of a completely different nature as he is currently preparing to kayak down the Grand Canyon.

In the article, the New York Times caught up with Erik while training at the U.S. National Whitewater Center in North Carolina, where he can perfect the skills needed to kayak the Colorado River through the Canyon. Those skills are daunting for someone with normal vision, but for Erik they require a completely different level of dedication. He says that he paddles by listening to the water around him and feeling what is beneath his boat and paddle. It is an intuitive approach to the sport that can only be mastered through practice and experience. Even with that experience however, Erik is trailed by a friend while out on the water who gives him verbal directions on which way to go and how far to turn.

There is no specific date set for when Weihenmayer will make his attempt on the Grand Canyon, although he says that if his training continues to progress that he hopes to do so next year. The trip will be a long and demanding one through some remote parts of the country. Erik says that they won’t even be able to use satellite phones to stay in contact on certain sections of the paddle, which will be a multi-day affair.

Considering all of the things he has accomplished, you would think at some point I would cease to be amazed at the things that Erik does. But paddling the Grand Canyon will be yet another amazing feat to add to a resume that is already full of fantastic adventures.

1 thought on “Erik Weihenmayer To Paddle The Grand Canyon”