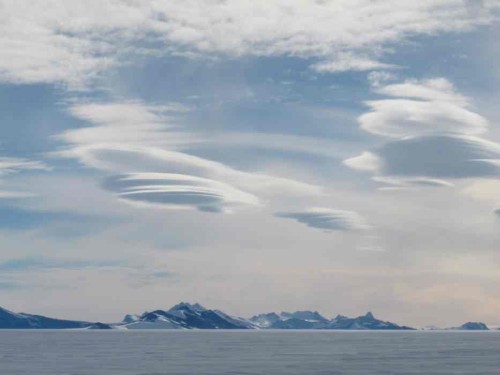 If you didn’t read my entire Antarctic update from yesterday, you may have missed the news that Eric Larsen has decided to pull the plug on his attempt to ride a bike to the South Pole. He had hoped to pedal from Hercules Inlet to 90ºS, but over the holiday break he discovered that it just wasn’t in the cards. High winds were making it very difficult for him to achieve any kind of meaningful milage and he was expending a lot of energy for relatively small gains. Considering his extensive polar experience, I think it is safe to say that Eric knows when to press on and when to call it a day.

For the past week or so, he’s been riding back to Hercules and even though he is heading north, and the winds are working in his favor, it hasn’t been a smooth ride. The snow and ice have made his bike unstable and it is not uncommon for him to go down when surface conditions change quickly and unexpectedly.

The plan was for ALE to send a Twin Otters aircraft to retrieve Eric and his bike yesterday, but poor weather scrubbed the flight. He had also hoped to arrive back at the Inlet, but was surprised to find that his GPS was telling him that he still had another 20 miles (32 km) or so to go. So, despite the challenges that he has encountered on this expedition, Larsen was actually happy to get another day out on the ice. He may not be able to ride all the way to the South Pole, but that doesn’t mean he’s in a hurry to head home either.

Reportedly the weather should be better today, so our next report from Eric will probably come from the Union Glacier camp, where he’ll wait for a flight back to Punta Arenas, and eventually home. It’s a shame that he wasn’t able to continue with his Cycling South expedition of course, but I know he had other plans in the works for visiting polar regions in the future.

Aaron Linsdau continues to struggle against the elements on his southward journey. He’s been battling terrible sastrugi over the past few days, which have made for slow going and physically punishing sessions. For those who don’t know, sastrugi are very hard ridges that form on the ice where the snow collects and they can grow to be quite large at times. They can run for miles on end and the skiers have to slide over them as they go, which saps the strength from their legs, slows their progress greatly and can be brutal on equipment. Aaron estimates he has another three days or so of battling these ridges and after that he hopes surface conditions improve.

To add insult to injury, the cold has really started to take its toll on his body. In addition to the chillblains that he has on his stomach and thighs, he now also has wind/freezer burn on his cheeks, which isn’t helping his spirits much either. Considering he has now spent two months out on the ice however, I suppose these nagging injuries are to be expected. Aaron estimates he still has about 154 miles (247 km) to go until he reaches the South Pole, which is roughly another two weeks depending on his speed.

Both Richard Parks and Vilborg Arna Gissurardóttir continue to make good time on their respetive marches to the South Pole. Parks knocked off another 33.5 km (20 miles) yesterday, despite less than ideal conditions. High winds made for a long day, but he should still be pleased with his progress thus far. Similarly, Vilborg seems to be laser focused on hitting the 20km (12.1 mile) mark each day, and this workman approach is serving her well. She reports that yesterday was a cold one since the sun wasn’t out, but that was the least of her concerns. The solo Icelandic skier says that she is also dealing with sastrugi as well as large crevasses, both of which can really impede progress.

More updates on the Antarctic season soon. We’re still a number of days away from any of these explorers from reaching the Pole. It’ll certainly be big news when they start to arrive.