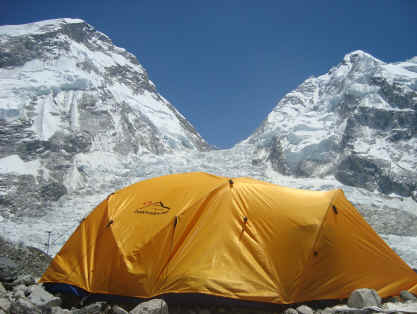 It is quite literally the calm before the storm on Everest today. Most of the teams are now back in Base Camp where they are resting their bodies and preparing for the big summit push ahead. Right now, everyone is watching the forecast to see just when the first significant weather window will open while they wait for the Sherpas to finish fixing the lines to summit .

Speaking of which, after taking several days off themselves, the rope-fixing team has returned to the upper slopes of the mountain today to resume their work. The plan is to get the ropes in place from Camp 4 to the Balcony today, then wrap up the work as quickly as possible tomorrow. That means that we should see the first summits of the season as the Sherpas get the lines in place all the way to the top.

They won’t have long to linger up there however as the weatherman says that another system of strong winds is moving into the area tomorrow night, which will force the Sherpas back down the mountain and make some of the more eager Western climbers wait for a more ideal time to make a move. There is a chance that a very narrow window will open on Sunday or Monday, but the vast majority of the climbers will wait until late next week before they start their final climbs.

One climber who is anxious to get going is Kenton Cool, a veteran of Everest who is looking to bag his 11th summit of the mountain. Yesterday Kenton announced that he will be attempting an unprecedented triple-header by climbing not only Everest, but also Lhotse and Nuptse too. With that in mind, the British mountaineer set out this morning on his attempt to hit the summit of each of the three mountains in one go, without returning to Base Camp. If all goes as planned, he’ll be away from BC for ten straight days. Cool says he knows he’ll need luck on his side, as the weather will be the ultimate decision maker on whether or not he can actually pull this off. No other climber has ever summited all three of those mountains in the same season. And while Nuptse isn’t a member of the 8000-meter club at 7861 meters (25,790 ft) in height, it does present some technical challenges that its neighbors do not.
As expected, David Tait has put himself into position to be amongst the first to summit Everest this season. His most recent twitter update indicates that he is now in Camp 4 and waiting to proceed up. I think it is evident that he intends to follow along behind the Sherpa team fixing the ropes to the summit and will probably be on top shortly after they complete their work. That will allow him to get up and down efficiently and well ahead of the crowds that are sure to be there next week.

Denis Urubko and Alexi Bolotov have completed their final acclimatization round having gone up as high as 8000 meters (26,246 ft). They’re now back down in the village of Deboche, where they are resting and getting ready for their attempt along a new route on the Southwest Face. Alexi has reportedly been quite sick on this last rotation, but he is improving now and should be ready to go. He and Denis will climb without oxygen and in alpine style along this new route.

The Peak Freaks team is arriving back in Base Camp today following a little R ‘n R down in the Khumbu Valley. With their acclimatization rotations over, they’ve been resting and getting healthy for their summit push. Now that that push is looming, they’re heading back up to get ready for the next phase of their expedition.

For the first time all season the entire IMG team is in BC together too. The company has three individual squads on the mountain this spring and they’ve all been passing one another on the trail as they rotate up to the various high camps at different times. Now, with their rotations wrapped up, they’re all getting to know each other a bit better while they wait for the summit push to begin.

Jumping over to the North Side of the mountain it seems the story is very similar to that on the South. After days of high winds, the conditions are finally improving there as well and it now looks like the Sherpa teams, which are all part of the China-Tibet Mountaineering Association, will finish fixing their lines to the summit either today or tomorrow as well. That means that the climbers who have been stalled out in Base Camp for most of the past week can get on the move once again too. Edita Nichols, who is climbing with the Altitude Junkies, reports that their Sherpas are carrying loads up to Camp 3 today in preparation for the team’s arrival at that point. While they’ve all enjoyed a little down time in BC, it is definitely time to go back to work.

The 7 Summits Club is reporting that the weather forecast isn’t great however, with hurricane winds predicated on the summit for most of next week. My guess is that means the teams on the North Side will head up for a little acclimatization at Advanced Base Camp, then retreat once again as they wait for a proper weather window. It’s going to be extremely busy on both sides of the mountain come late next week.

That’s all for now. Stay tuned for word on the first summits of the season. They will likely come later today.