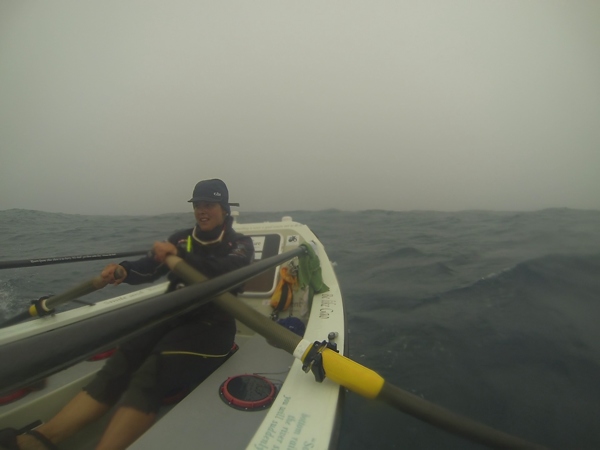 It has been a couple of months since we last checked in with Sarah Outen, the British adventurer who is attempting to complete a self-powered circumnavigation of the globe. In my last update, Sarah had just returned to the water and was embarking on a row across the North Pacific from Japan to Canada. That leg of the journey was expected to cover 7500 nautical miles (13,890 km) and take months to complete. But earlier this week she announced a change in plans that will see her now make landfall ahead of schedule.

If you’ve been following Sarah’s Pacific crossing you know that bad weather has hampered progress and in recent day she’s had a difficult time covering any significant ground. Her slower than expected pace left her with the real possibility of being stuck in the North Pacific as the seasons begin to shift. Autumn and winter will bring all kind of challenges including more frequent storms and much colder temperatures. With that in mind, Sarah and her team have made the decision for her to turn north and head toward the Aleutian Islands off the coast of Alaska. The plan now is to go ashore on one of those remote islands and than eventually island hop via kayak all the way to the mainland. Once there, she’ll climb back aboard her trust bike and start cycling across North America before attempting to row the North Atlantic sometime down the line.

Sarah’s circumnavigation attempt is called London2London via the World because she set out from that city on April 1, 2011 and it will eventually be her finish line as well. The journey began with a paddle down the Thames River and a crossing of the English Channel. After that it was onto the bike, with a ride covering some 11,000 miles (17,702 km) across Europe and Asia that eventually ended in Choshi, Japan. From there, Sarah returned to the ocean and began her row across the Pacific, but a tropical storm put a halt to the expedition, forcing her to temporarily abandon the attempt. That took place in the summer of 2012 and in the spring of this year she set off once again with the intention of finally reaching Canada. That doesn’t seem likely now, which is why she has changed direction, but this slightly altered plan will still allow her to complete her goal of traveling around the globe completely under her own power.

As of today, Sarah still has 330 miles (611 km) to go before she reaches the Aleutian Islands. That means she could be out on the water for several weeks yet depending on the weather conditions. Once she actually arrives at the islands she’ll need to find a safe place to land, which can be a bit tricky for any boat. After that, it seems likely she’ll wait for spring to begin the kayaking portion of the Pacific crossing. By the time she wraps that up, I’m sure she’ll be ready to get back on her bike.

4 thoughts on “London2London Via The World: Sarah Changes Course, Heading To Alaska”