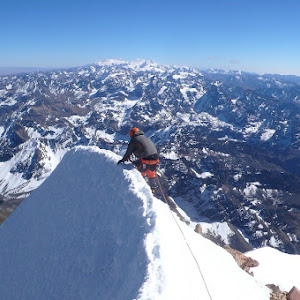 Earlier this week ExWeb posted a remarkable story about Argentinian climber Maximo Kausch who has set a goal for himself to climb all of the 6000-meter peaks (19685 ft) in South America. The idea for  this massive undertaking sprang from an expedition on Cho Oyu that Maximo led a few years back and upon returning home he decided that he wanted to continue climbing as much as possible. That led to him coming up with the concept of tackling all of the 6000 meter mountains, although at the time he had no idea what he was getting himself into.

The first obstacle that Max had to overcome was finding out just how many of these mountains were in the Andes. He thought that there might be as many as 50 when he announced his plans but research later revealed that there were 118 6000-meter peaks on his list. He had to use a combination of satellite mapping, data from NASA and Google Maps to locate all of the mountains, some of which are located in very remote places and have as many as 4 or 5 names. It took him three years just to compile all of the data he needed to begin the project.

After that, he was ready to set out but needed reliable transportation to get him to and from the mountains. He decided to use a motorcycle to get from one base camp to the next but he first had to overcome yet another obstacle – he had never ridden a motorcycle before in his life. Once he managed to master the bike, he was off and running and has been climbing ever since. He now spends about 8-9 months of the year climbing in the Andes. Sometimes he’ll bag several peaks in a single week and on occasion he’ll get two in a day. He tells ExWeb that he is mostly homeless right now while he pursues this challenge.

While climbing Max has made some interesting discoveries along the way as well. On more than one occasion he has come across Incan ruins on his way up to the summit. In one case he even discovered a large structure 60 meters square (197 feet) at the summit of one of the 6000-meter mountains. What exactly the structure was used for and what else remains at the site is a mystery.

You have to hand it to him, Maximo sure knows how to pick a challenge. The Andes offer plenty of great climbing and before he’s done, he’ll have seen most of it. At the point the story was submitted he said that he still has 57 mountains to go, so he’s a little over halfway to his goal. If he achieves this, it’ll certainly be quite an accomplishment.