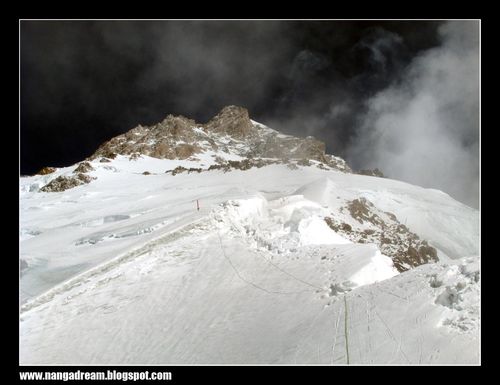 As is always the case with a big winter climb, the teams on Nanga Parbat have had to use patience and perseverance so far. The weather dictates when they can move and when they must take shelter, and while conditions were good early on, they have fluctuated wildly since then. At the moment, the weather is good by winter standards, but things are expected to change over the next few days, forcing the climbers to return to Base Camp and wait for another window.

The Polish Justice for All team has reported in for the first time in awhile. They indicate that things are good there, but overcast skies have made it difficult to use their solar panels for recharging the batteries on their various devices, including their laptops. While they’ve been under a media blackout, they have continued to work the route however, and have now cached their gear at 5800 meters (19,028 ft). As part of the acclimatization rotations, several of the team members have even been has high as 6400 meters (20,997 ft) as they get use to the altitude. The Poles also indicate that they have been doing most of the rope fixing so far, with just a little help from the smaller, but very experienced, North Face team, who put in 200 meters of line along a very crucial section leading up to the 6400 meter mark.

The team now has Camp 2 established and is shuttling more gear to that point. They hope to have C3 built soon as well, and were hoping to climb up to 7000 meters (22,965 ft), but weather conditions have turned them back for now.  Steady snowfall in recent days, with more in the forecast, means that they’ll have to be more careful as they go up.

Meanwhile, the North Face team hasn’t posted a status update in more than a week, which followed Simone Moro and David Göttler acclimatization rotation to C2. ExWeb is reporting that they went back up the mountain on Sunday and are back in C2 today. Tomorrow, they will attempt to reach Camp 3, weather permitting. If that happens, they’ll try to cache gear and supplies there and may even spend the night, provided the weather window remains open long enough.

Finally, ExWeb is also saying that Italian solo climber Daniele Nardi is still en route to Nanga, but should arrive in BC on the Diamir face tomorrow. He is being escorted to that point by armed guards i an effort to ensure safety for foreign visitors following the massacre that took place in Base Camp last summer. Once he has established his camp, and acclimatized some, he’ll make an alpine style ascent of he mountain.

Remember, each of these teams is attempting to make history. Nanga Parbat is one of two 8000 meter peaks that has yet to be climbed in the winter, the other being K2. Conditions on the mountain have been good so far, but with a little less than two months to go in winter, the worst weather is probably yet to come. Still, if things remain consistent, one or all of these teams has a shot at reaching the summit.

4 thoughts on “Winter Climbs 2014: Patience and Perseverence On Nanga Parbat”