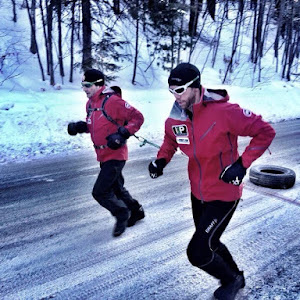 The 2014 Arctic expedition season is about a week away from starting, and teams of explorers are now busily putting the final touches on their preparation work. Some of them will be attempting to reach the North Pole, while others will be exploring the Arctic in order to conduct research into climate change. But one expedition will travel to Baffin Island, where a group of endurance athletes will attempt a speed crossing through the harsh and demanding environments there.

The team includes ultrarunner Ray Zahab, whose long distance running exploits we’ve followed on more than one occasion on this blog. Those expeditions have included runs across the Atacama and Gobi Deserts, as well as a journey to the South Pole and a crossing of Lake Baikal in the middle of winter, amongst others.

Ray will be joined on his adventure by Ryan Grant, Stefano Gregoretti and Ferg Hawke. The four men intend to make the journey completely unsupported, choosing to pull all of their gear and supplies behind them on sleds weighing no more than 50 pounds. They will begin the expedition in Qikiqtarjuaq, Nunavut, where they’ll first film interviews with friends before hitting the trail. Once underway, they hope to cross through Akshayuk Pass in under 48 hours, before continuing on to Pangnirtung.They’ll cover approximately 100 km (62 miles) in the pass, and another 40 km (24 miles) beyond that out on the open ice.

For Ray, this will be the fourth time that he has made this crossing, but his previous three Baffin traverses were done in the summer or fall. The winter will present new challenges with extreme cold and unpredictable weather.

The team will set out from Ottawa on March 6 and plan on launching their run a few days later. Watch for updates on Ray’s Facebook page.