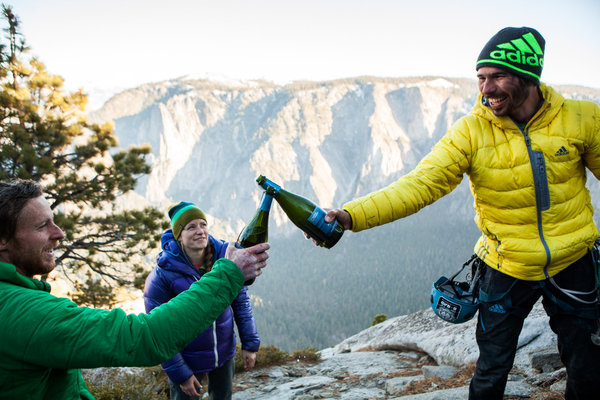 The biggest news in the world of outdoor adventure today is without a doubt the successful completion of the Dawn Wall climb by Tommy Caldwell and Kevin Jorgeson. The duo reached the summit of El Capitan at 3:25 PM local time yesterday after spending 19 days on what many have called the most difficult climbing route in the world.

The Dawn Wall – so named because it is the first granite face to catch the morning sun – is a massive chunk of rock that stands 3000 feet (900 meters) in height. It has been climbed previously of course, but all other ascents were aid climbs which use ropes, pitons, and ascenders to move up. Caldwell and Jorgeson are the first to do it using only their own physical abilities. Their ropes and protection were only place to prevent them from falling.

For the two men, this is the end of a quest that started more than eight years ago. Scouting the Dawn Wall and trying every pitch took many days and previous attempts fell short of the goal. This year, Tommy and Kevin were determined to get to the top, and although it wasn’t easy, they were able to accomplish something that many thought was impossible.

After finishing the climb yesterday Jorgeson said “I hope it inspires people to find their own Dawn Wall, if you will. We’ve been working on this thing a long time, slowly and surely. I think everyone has their own secret Dawn Wall to complete one day, and maybe they can put this project in their own context.”

When they finished yesterday a crowd of well wishers were on hand to greet them. The Dawn Wall climb has captivated the world over the past few weeks, with even non-climbers getting pulled into the drama. The final pitches of the ascent were even streamed live on television and the Internet, with millions watching as Tommy and Kevin made history.

Neither man is ready to discuss what projects are next on their schedule, nor should they. They have just complete an amazingly difficult expedition, and it is time to rest, reflect, and recovery. I’m sure we’ll be hearing a lot more about their efforts in the days ahead, but for now these two men should simply experience the moment.

Congratulations to Tommy and Kevin on an amazing job, and for inspiring all of us to pursue our dreams.