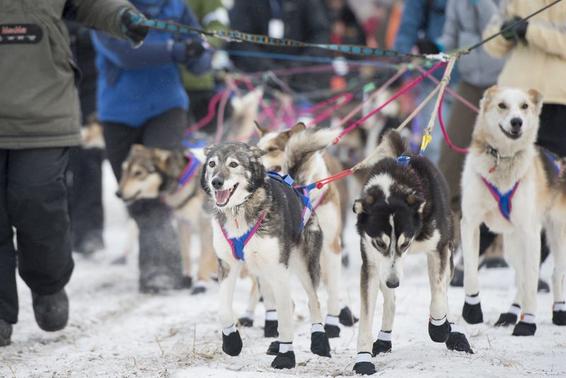 It has been an interesting 24-hours in the 2015 Iditarod, where several of the top mushers are clearly making tactical moves at this stage of the race in order to be ready for the final push to Nome sometime next week. Several of the main contenders arrived at the Galena checkpoint yesterday, where they have been taking their mandatory rest stops. As a result, the leaderboard has been scrambled some, with one of the top contenders now in prime position to take the lead heading towards the halfway point of the race.

As of this writing, Aaron Burmeister is the leader out into the Huslia checkpoint. Currently running in second place is defending champion Dallas Seavey, who arrived about two hours behind Burmeister, although Seavey has already taken his mandatory 8-hour rest, while Burmeister has yet to stop. The only other musher to reach Huslia at this point is Thomas Warner, who is an additional hour and a half behind. Chasing the leaders are Martin Buser and Hugh Neff, both out of Galena and running in fourth and fifth places respectively.

Five-time champ Jeff King was leading the race into Galena yesterday, but he has now slipped to 10th place overall as he appears to be taking his mandatory 24-hour break. With his 8-hour rest already out of the way, he seems poised to make the run all the way to Nome. With 583 miles (938 km) yet to go, that is a bold strategy to pull at this stage of the race, but it could pay off in the long run.

Other fan favorites on the leaderboard include DeeDee Jonrow holding down the 8th spot into Galena, as well as Aliy Zirkle, who has come up just short in the last three races, finishing second each time to a member of the Seveay family. She’s currently in 11th place, and resting in Galena too, although she’ll no doubt make a move in the days ahead. 2013 champ Mitch Seavey has already taken his 24-hour rest as well, and seems ready to improve on his current standing of 42nd place overall too. Once he returns to the trail out of the Galena checkpoint, expect him to start chasing his son.

At this point of the race, it appears that just about anyone could still win. There is a lot of racing yet to come, and with much of the route taking place on frozen rivers, just about anything can happen in the days ahead. After the race was diverted further north due to a lack of snow, the route is now turning towards a more traditional path that is known to the mushers. This will help them plot out their strategies more fully, and to know what to expect on the trail ahead.

It is hard to say exactly when the first teams will start to arrive in Nome, but around Wednesday of next week seems like a good bet. The weekend will likely sort out some of the contenders, and give us an idea of who will be battling for the win. Stay tuned for updates from The Last Great Race.