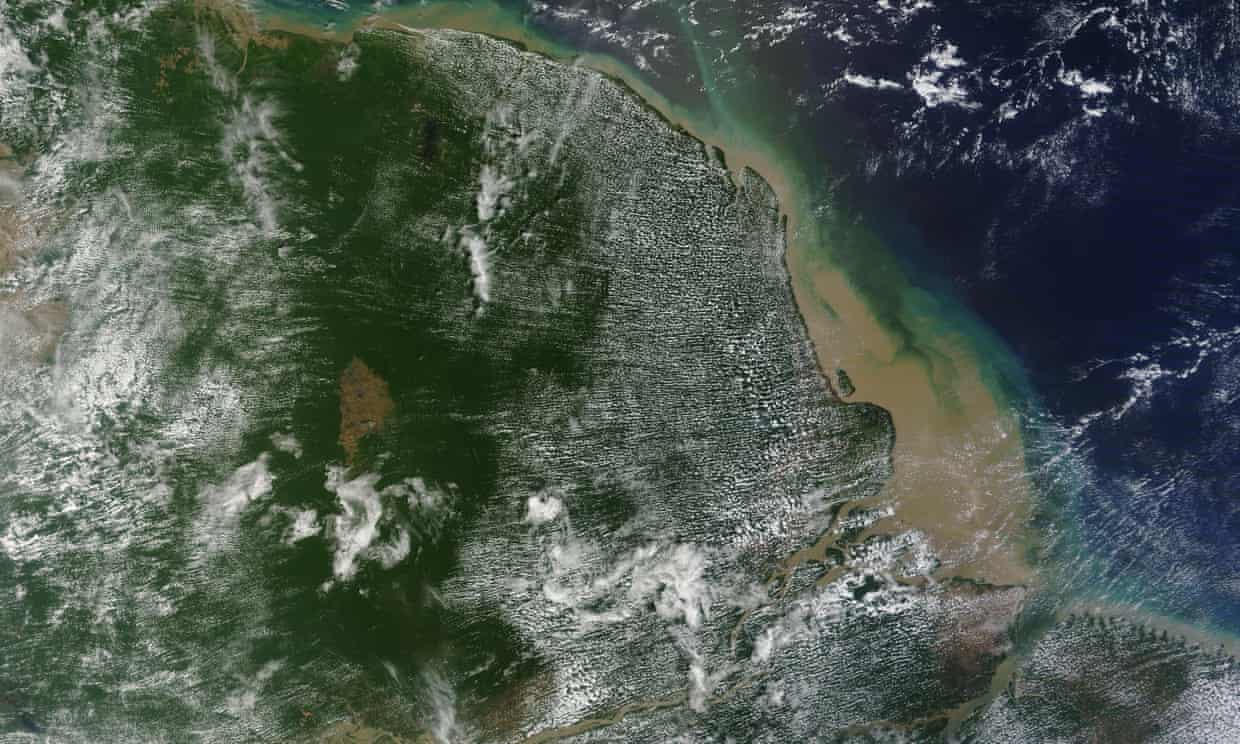 Here’s a story that is further proof that our world still has a lot of mysteries and surprises to share with us. Scientists have discovered a massive coral reef hidden under the muddy waters at the mouth of the Amazon River in South America. The discovery comes at a crucial stage however, as the region has already been charted by petroleum companies looking to plumb its depth for oil.

Indications that the reef might exist first appeared back in the 1970’s when fishermen began catching fish that were more commonly found on and around reefs in other parts of the world. But confirmation of the existence of this particular reef didn’t come until recently, when researchers were finally able to prove that against all our knowledge and understanding of the ocean that it was hidden away along the coast of Brazil.

The reef stretches for nearly 700 miles (1126 km), and is more than 3600 sq. miles (9300 sq. km) in size. It is also said to be home to at least 60 species of sponges and 73 species of fish. Even more surprising is the fact that unlike other reefs found around the world, this one appears to be very healthy, and even growing. Climate change has begun to warm the oceans, which is causing coral reefs to die at an alarming rate. But this one is not displaying those same symptoms.

What makes this new reef so amazing is that it exists in a place that it was previously believed one shouldn’t be able to survive. While it is submerged in ocean waters, the surface of the Atlantic is covered in fresh water that is dumped in from the might Amazon River. The river also deposits plenty of mud and sentiment into the water, which is typically not conducive to the growth of coral either. On top of that, oceanographers typically find reefs in shallower waters that are warmer and clearer than where this one exists. This has left some scientists to wonder if other reefs are out there in our oceans, just waiting to be found.

But the good news over the discovery of this reef – and the fact that it is thriving – is tempered somewhat due to the fact that it is already being threatened by man. It seems that the Brazilian government has already sold 80 parcels of ocean to oil companies to start drilling at the mouth of the Amazon. 20 of those blocks are already in operation, some of which are believed to be right on top of the reef itself. How that will impact the life of the reef moving forward remains to be seen.

Coral reefs play an important role in the keeping the ocean healthy as they often form protective barriers for ecosystems both along the coast line and living within the waters themselves. As those reefs recede, ocean storms, hurricanes, and typhoons could have a larger impact on certain regions of the planet. The Earth’s coral reefs are also seen as the canary in the coal mine in terms of indicating the impact of climate change on an area too.

Still, finding this particular reef is amazing, especially since it shouldn’t exist at all. Hopefully it will be well protected moving forward.