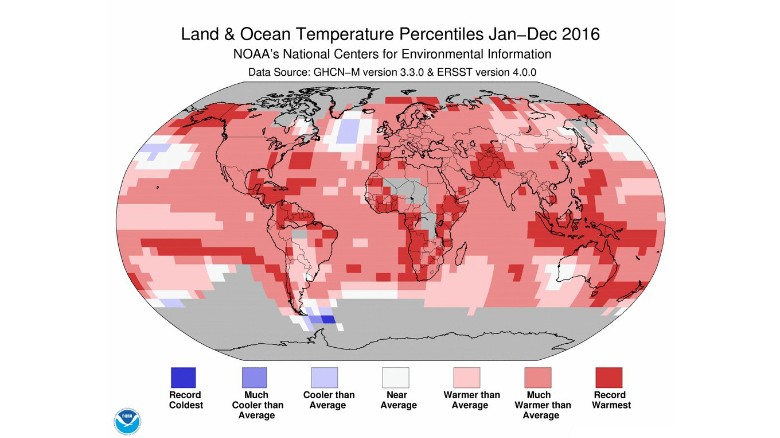 Stop me if you’ve heard this one before…

According to NASA and NOAA, 2016 was the hottest year on record, breaking the previous mark for the third consecutive year. And if that wasn’t sobering enough news, the latest report on climate change also indicates that 16 of the 17 hottest years ever have taken place since 2000.

Studies indicate that the average temperature across the planet increased by 1.1ºC (1.98ºF) last year, which may not sound like much but it is enough to have a dramatic impact on large sections of the globe – especially in the polar regions. It also means that we’re already well on our way towards surpassing the 1.5ºC goal set by the Paris Climate Agreement from 2015.

The cause for the increased temperature remains the same as it has for the past two decades, or longer. The burning of fossil fuels increases carbon dioxide emissions into the atmosphere, and the continued deforestation of rainforests – often referred to as the “lungs” of our planet. These harmful processes seem to be continuing to accelerate, despite efforts to reverse their effects.

Historical records of temperatures have been kept as far back as the 1880’s, which means we have more than 130 years of data to compare the current trends to. It is also becoming increasingly more difficult to deny the impact of humans on the environment. As part of the report, Michael Mann, the director of the Earth Science Center at Pennsylvania State University,  said “The effect of human activity on our climate is no longer subtle. It’s plain as day, as are the impacts — in the form of record floods, droughts, superstorms and wildfires — that it is having on us and our planet.”

To make matters worse, the Arctic seems to be warming at a faster rate than the rest of the planet, with temperatures now climbing to 3ºC (5.4ºF) higher than they were a decade ago. That means an increased rate of melting of the ice caps, which in turn leads to raising sea levels around the world. That will have a big impact on coastlines, eventually putting areas that are now inhabited potentially under water.

But, there is cause for some hope. Scientists believe that 2017 won’t be warmer than the previous years thanks to El Nino keeping things a bit cooler. This is probably a temporary state of affairs however, even if it does buy us a brief respite.

How anyone can continue to deny climate change is beyond me. Whether or not humans are having an impact doesn’t matter any longer. It’s happening, and we need to do whatever we can to halt it. It’s not too late, but time is running out.