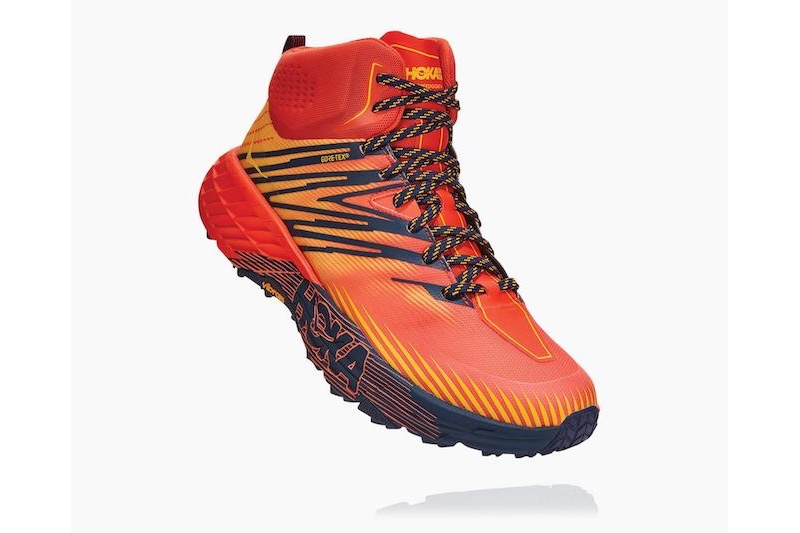 Over the past few years, Hoka One One has built itself a reputation for creating shoes that ride on a thick, cushy sole designed to be overprotective on the feet, ankles, knees, and hips. These so-called “maximalist” shoes have earned the company a very loyal following with a continent of runners and hikers who appreciate the over-built style.

One of Hoka’s most popular shoes has been the Speedgoat model, which is designs specifically with trail and ultra runners in mind. I’ve recently had the chance to set out the new Hoka One One  Speedgoat Mid Gore-Tex 2 model, which has been a mainstay in the company’s line-up for awhile. And even though I found a lot to like about this shoe, there were a few things about it that kept me from becoming a convert to the Hoka approach.

In general, when I’ve reviewed Hoka’s in the past, my main complaint has always been that the overly large sole causes me to feel like I’m running on pillows. In terms of cushioning and lessening the impact, that is probably a major selling point for some customers, but it has always left me feeling ponderous and slow.

It also creates a sensation of being detached from the road or trail, but it is unsettling as an almost-daily runner. That said, I notice that my legs are less tired after running in Hoka shoes for an extended period of time and that they help nagging injuries to heal up too. This will make some appreciate the tradeoffs that come with the maximalist approach, which has been especially helpful with friends who are recovering from hip and knee surgery.

The Speedgoat Mid Gore-Tex 2 continues this same legacy, both for good and ill. On the plus side, after running for longer distances in these shoes, I definitely felt more refreshed and ready to keep running further.

As with previous Hoka shoes that I’ve tested, I still had that detached feeling that left me less confident and sure throughout my workouts, which was unsettling at times too. This may be a personal issue that I’m just going to have to overcome, but it is worth noting nonetheless.

Those issues aside, the Speedgoat Mid 2 is everything you would expect from a Hoka shoe, which is to say comfortable, durable, and well-padded. After putting many miles on my test shoes, they still look like they are in great shape and a little worse for wear.

In fact, other than picking up some dirt here and there, they look practically brand new, which is a testament to how well they can handle abuse. And since these shoes are meant to be used for light hikers and trail runners, this extra durability will pay off in spades for those looking to use them for extended periods of time.

Runners know to switch out their shoes every 300-500 miles (480-800 km), but hikers may use them for longer periods of time, and it’s good to know that Hoka has built them to last.

With its trademark overly-cushioned sole well represented on the Speedgoat Mid 2, Hoka has also created a very stable shoe out on the trail. Its aggressive tread helps runners and hikers maintain a solid grip on various terrains, even in slick conditions.

Despite my aforementioned reservations about how the shoe makes me feel less connected with the ground, that never translated to feeling unstable in any way. In fact, these shoes are surprisingly surefooted considering their dimensions, particularly when you take into account the stack height on the Speedgoat. That’s no small feat, all things considered, and a testament to the engineering level that Hoka puts into its shoes.

To take on Altra’s Lone Peak running shoe, which comes in a high top version and is extremely popular with thru-hikers, Hoka is pushing the Speedgoat Mid in that category too.

The additional padding and support around the ankle definitely make this a contender in that realm, adding even more stability and protection. As a big fan of the Lone Peak, I found Hoka’s efforts to be quite similar, and as a hiking shoe, it offers similar levels of performance and recovery as it does runners.

The bulky heal may still turn off long-distance hikers looking to go a bit leaner on the trail, but those who would prefer additional support and comfort may want to give these a try instead.

Chances are, your legs and feet will feel more rested after a long day, at least once you get over the hump of the maximalist construction, which does feel somewhat different on your feet.

One area of disappointment that I had with the Speedgoat Mid 2 was its level of protection against moisture. The shoe is equipped with a Gore-Tex lining, which should provide a fairly high level of waterproofing. But on more than one occasion, while running in a rainstorm, I found my feet getting wet while using these shoes.

They performed just fine in light rainfall or when making stream crossings, but when I found myself caught out in a heavy downpour on several occasions, the shoes seemed to get overwhelmed with moisture over time.

This hasn’t been a persistent problem for other reviewers as far as I can tell, but it was one that I encountered on at least two separate occasions. It also certainly diminished my experience with this shoe, making it more difficult to recommend.

Chances are if you see the Gore-Tex label on footwear, you expect it to be waterproof, which simply wasn’t the care in my test models.

If you’re a fan of Hoka shoes already, chances are you’re going to like the Speedgoat Mid 2. It has all the footwear hallmarks that have made the company popular amongst a certain segment of the running community.

The thickly-cushioned sole, aggressive tread, and high-quality construction are all on display here, and if that is what draws you to the Hoka brand, you’ll be thrilled with what they’ve produced.

If you’re like me and find the maximalist approach to be a bit unnerving while running, these shoes probably won’t bring you around to the Hoka way of thinking. Add in some issues with the level of waterproofing, and it’s difficult for me to give these shoes a thumbs up, even if I suspect the issues were with my test model rather than the Speedgoat Mid 2 line as a whole.

The Hoka Speedgoat Mid Gore-Tex 2 is competitively priced to take on a similarly designed and specced shoe from the competition.

High-end running shoes aren’t inexpensive these days, but this is certainly well within the norm for what Hoka has brought to the table.

While not for me, this is a shoe that those with chronic knee, ankle, or hip issues may want to check out as they continue to run with those kinds of nagging pains. You may just find that this is the perfect shoe for you, with the level of cushioning you need to help recover from aching joints brought on by plenty of mileage. I can certainly acknowledge the Speedgoat’s benefits in that area, even as I come to terms with the idea that these shoes just aren’t for me.