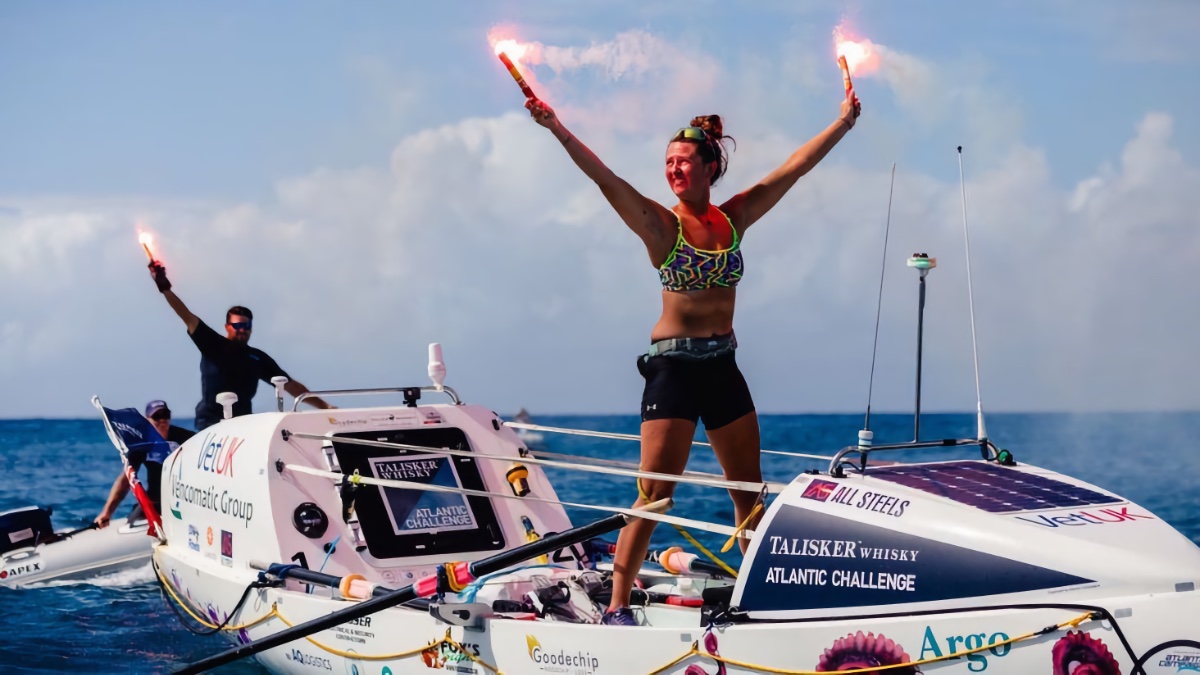 Youngest Woman Back in late December, the Talisker Whiskey Atlantic Challenge got underway in the Canary Islands. The annual race pits a few dozen hardy and adventurous souls against one another in a race that requires strength, stamina, and plenty of determination. Participants must face hundreds of miles of open ocean, unpredictable weather, tumultuous seas, and endless boredom on their way to the island of Antigua in the Caribbean—covering a distance of more than 3000 miles (4828 km) en route.

This year’s race included several solo racers who were mixed in with the more-traditional two- and four-person teams. One of those solo rowers was a British woman by the name of Jasmine Harrison, who reached the finish line last week. And although she ended up finishing 20th out of 21 boats, she also managed to set a pretty impressive record along the way.

Youngest Woman to Row Solo Across the Atlantic

Harrison reached the finish line in Antigua on February 20, requiring 70 days, 3 hours, and 48 minutes to cross the Atlantic. While that was more than a month behind the first-place team—a two-person squad called Row4Cancer who cover the distance in 32 days, 22 hours, 13 minutes—she did write her way into the history books anyway. By finishing the ocean crossing, she now holds the distinction of being the youngest woman to row solo across the Atlantic.

Everything She Hoped for and More

Back on dry land for the first time in nearly two and a half months, Harrison described her Atlantic Ocean row as “amazing,” while also admitting that it was a blend of both “good and bad memories.” While she relished being away from the grind of day-to-day life, including being inundated with social media and bad news, she also faced some significant challenges all on her own out on the water. Fortunately, she was able to use a satellite phone to call home from time to time.

Early in the race, Harrison found herself battling strong winds and currents. So much so that there were days where she stayed at the oars for hours at a time, only to stand still or even lose ground. Two days out from Antigua, she also capsized, creating a potentially dangerous situation so close to the end of the race. Modern rowboats are designed to self-right in those conditions, however, which meant she was able to collect herself and push on.

So how exactly does a young British woman get inspired to row an ocean all by herself? For Harrison, that part of the story starts back in 2018 when she was sailing around the Caribbean. At the time, she was helping to deliver much-needed supplies to the island of Dominica, which had been hit hard by hurricanes a year earlier. Along the way, she stopped in Antigua and instantly made a connection with the island.

While there, she also witnessed the arrival of some of the rowers who were taking place in the 2018 edition of the Talisker Whiskey Atlantic Challenge. After speaking with some of the participants in that year’s race, she immediately started planning and prepping for her own entry. It took three more years to make that a reality, but now she has completed the crossing herself.

Back home in the U.K., Harrison lives in the small town of Thirsk, located in North Yorkshire. There, she works as a part-time swimming instructor and a bartender. Considering the epic adventure that she finished, something tells me she’ll have plenty of stores to share with patrons at the pub.

As inspired as she was to make the crossing and set the new record as the youngest woman to row solo across the Atlantic, there were other motives as well. Everyone who participates in the event does so to raise funds for charity. For Harrison, that charity was for an organization called Shelter Box, which provides important supplies to people living in regions struck by the disaster. Shelter Box’s choice seems fitting considering her work to assist those living on Caribbean islands that were hit hard by hurricanes.

Harrison’s effort helped raise £10,000 (about $14,000) for Shelter Box, although I suspect that number will go up as more people hear her story. It is an impressive one in terms of setting goals and staying focused. Congratulations to Jasmine for accomplishing such an amazing feat.