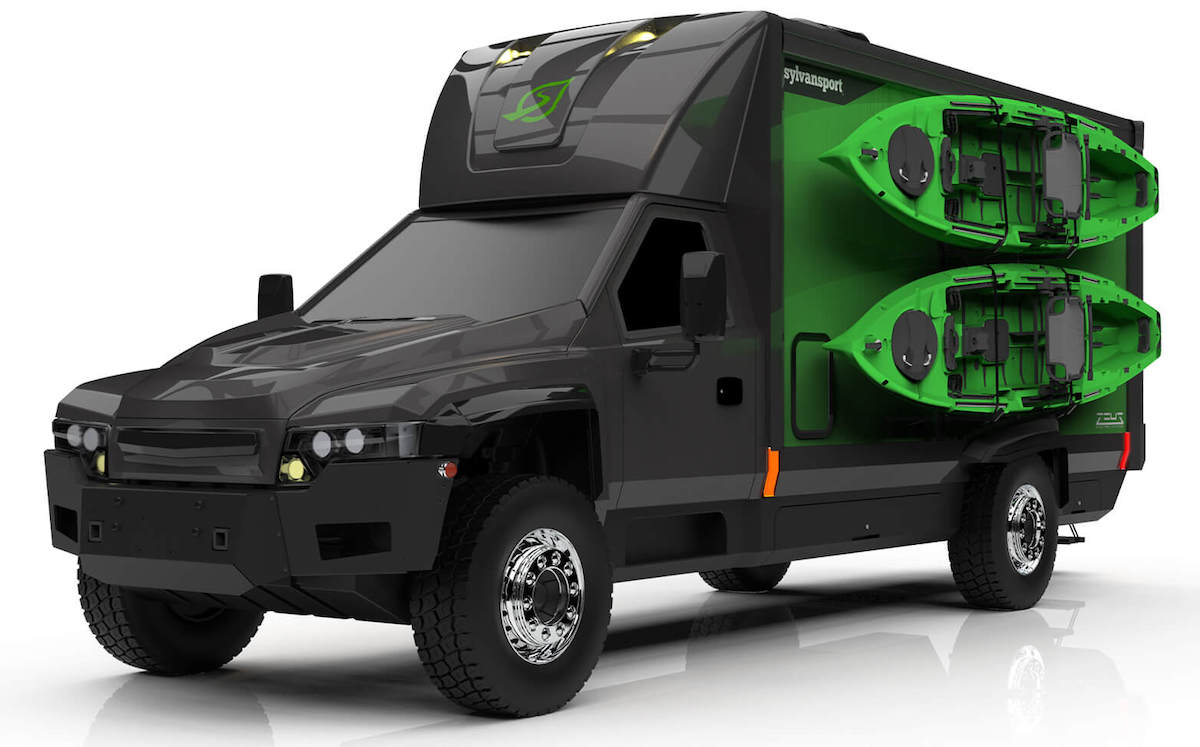 There is no question that we’re on the verge of an electric vehicle revolution. Not only are EVs better for the environment, they also offer amazing performance and an array of unique technology. Of course, Tesla has been leading the way in this space for years, but now nearly every major car manufacturer has announced plans to introduce an electric vehicle (or three) in the semi-near future. Even EV start-up Rivian is set to begin shipping it’s highly anticipated R1T adventure pick-up and R1S SUV in the next few weeks.

Recently, we took a look at how electric vehicles are reshaping the classic African safari in Kenya, bringing a quieter, more eco-friendly experience to the savanna. Now, camper company Sylvansport is teaming up with Zeus Electric Chassis to deliver a similar experience to RV owners by introducing an EV motorhome built for road trip adventures.

Last week, Sylvansport and Zeus unveiled a series of renders of their concept electric RV, giving us a glimpse of what they have in mind with this project. Unsurprisingly, those renders show a truck-based motorhome that has a lot of potential to be the electric adventure vehicle that many have been waiting for.

The initial designs are a deft mix of the things that each company brings to the table. For Sylvansport that’s a keen sense of what RV owners need while traveling, including ease of access to the interior and built-in amenities that make life at the campsite better. Meanwhile, Zeus has delivered a rugged platform on which the electric RV will ride, providing plenty of power and functionality as well.

With a gross-vehicle weight rating of 14,000 pounds (6350 kg), the as-yet unnamed RV should be a beast on the road. Much of that GVWR is due to the vehicle’s electric motors, which are capable of producing an astounding 3000 ft lbs of torque and up to 290 horsepower. The motorhome comes equipped with all-wheel drive as standard, which means it should perform reasonably well off road too. Add in independent front and rear coil spring suspensions and “military-grade” axles and it promises to be a go-anywhere adventure base camp.

While the mechanical specs of the electric RV are certainly interesting, it is the promised range that has garnered much of the attention. Sylvansport and Zeus say that their vehicle will be capable of traveling more than 400 miles on a single charge, which is quite impressive consider smaller and lighter EVs struggle to hit 300 miles. Some of this may be attributed to the fact that as a larger vehicle the motorhome can also accommodate bigger batteries too.

Reportedly, the adventurous EV will also support DC fast charging, which is capable of generating more than 480 volts of sustained power. That translates to the batteries reaching an 80% charge in less than an hour. Level 2 charging is also supported, allowing owners to plug in at home and charge their vehicle—albeit at a slower pace— before setting out on their journey.

That extended range may be necessary however, as we wait for more extensive charging networks to be built. Considering that RV owners like to take their vehicles to remote places, having an extended range will come in handy at times. This should be less of an issue as more EVs hit the road, but for now it remains a concern, particularly in less populated sections of the country where even gas stations are few and far between.

Beyond the information shared above, not much else is known about this electric RV. We know that Sylvansport and Zeus expect to announce more in 2022, but when it will actually become available to purchase remains a mystery. Considering the challenges that manufacturers have had with bringing EVs to market, it could be a few years before production actually ramps up.

When it does become available for purchase, the motorhome will come in two colors—green and gray. It will also ship with onboard storage for carrying kayaks, bikes, or other outdoor toys. What the layout of the interior will look like has yet to be revealed however, so expect some surprises in terms of built-in technology and design in that area as well.

“From the inception of SylvanSport in 2004, we knew that our innovations in product design would one day lead to the creation of a class-leading, all-electric motorhome,” SylvanSport CEO Tom Dempsey revealed in the press release announcing the vehicle. “Zeus’s technology advances, from chassis design to energy storage and management, are helping us to achieve this in the most forward-thinking, environmentally clean way.”

Find out more on the Sylvansport Leading the Charge webpage.