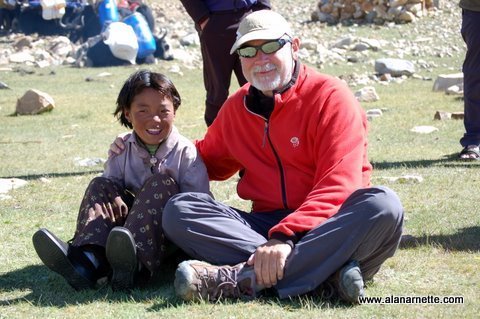 I mentioned a few days ago that Alan Arnette has reached base camp on Shisha Pangma and was preparing to begin the challenging task of reaching the summit. His latest dispatch comes from BC and gives us a glimpse at what it’s like there.

After four days on Shisha, Alan has gotten to know the Tibetans that live there, quite well already, and his stories about them and what life is like at BC are quite touching. It’s clear that Alan enjoys meeting these people and that part of the reason he climbs is for the opportunity to experience that rich Himalayan culture. This recent post doesn’t mention much about climbing or the summit, or any of those other things that we’re so uses to talking about, and yet it’s still it captures the essence of being on one of these expeditions in a totally different way. I highly recommend you read it, the rest of Alan’s dispatches while you’re at it.

I would also be remiss if I didn’t mention Alan’s excellent photography work. Each of his dispatches have been accompanied by some really great images, this latest one included. It’s like he’s weaving together an impressive travelogue to go along with his climb reports, and his shots are really helping to frame the story. They are definitely worth taking a look at.

Soon, Alan will get back to work, and the climb will finally begin. The plan is to head out to ABC tonight, and he’ll once again be back on his Road Back To Everest. As many of you know, Shisha is a training climb for Alan, who will be going up Everest in the Spring to raise money and awareness for the Cure Alzheimer’s Fund. So while you’re over at his site, enjoying those great dispatches and amazing photographs, think about clicking on that banner for the Fund, and donating for the cause. It’s quick, easy, and every little bit helps.